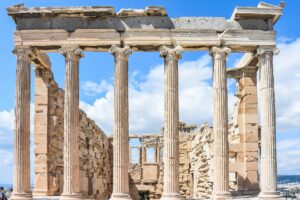 Greek Mythology is filled with many wonderful stories and all of them are interesting in their own way. At one point in time, the Ancient Greeks used these stories as ways to explain things they did not understand. At a time when historical records weren’t as well kept, or when scientific principals weren’t understood, these myths helped give people clarity in regards to how the world worked.

Today, we do understand more about history and the natural world. However, it doesn’t mean these stories are any less interesting! Here’s a look at some of the most interesting stories that Greek Mythology has to offer:

How Athens Got Its Name

Athens is a mysterious city. To the Ancient Greeks, it seemed to have sprung up out of nowhere. It also was located in a fairly desolate area. How could Athenians make their living? Eventually, the people learned how to thrive, but it wasn’t without the gods. In this story, we learn that the city of Athens was named after the Goddess Athena because her gift to the Athenians, the olive tree, was deemed the most valuable.

Where did fire come from? In this story, we learn that only the gods had fire. Man was left in the dark, without warmth or a way to cook their food. Prometheus, who was the Titan god of fire, had compassion for mankind. He stole the fire from the gods and gifted it to mankind, and was punished for his actions. He was chained to a rock where the birds ate his liver.

When the Earth was new, it was a simple place. Humans didn’t have the ability to experience complex emotions, both good and bad. This all changed when Pandora’s curiosity caused her to open a mysterious box. When she did, complex emptions such as love, hate, truth, sadness, and faith were given to the world. Some of these emotions are negative, but some are good.  Even today, “opening Pandora’s box” is a popular idiom used to describe what happens when you do something that will cause problems.

Persephone, the daughter of the goddess Demeter, was known for her beauty. Hades saw her playing in the woods, and he was completely enchanted. He wanted Persephone all to himself. He eventually kidnapped her and brought her to the underworld. Demeter, who controlled the weather and the harvest, was so grief stricken, the world fell silent and cold, and nothing would grow. Zeus intervened and struck a deal with Hades and Demeter. Persephone could return to the surface for half the year, and this created the Spring and Summer. She had to return to Hades for the other half, and this created the fall and winter.

There are some unique and interesting stories present in Greek Mythology. To the Greeks, they often helped explain the world around them. To us, they offer an interesting glimpse into the ancient world.