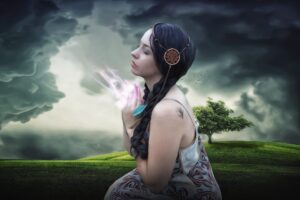 In recent years, “Mother Earth” has become a catch-all term to describe the planet as a whole. However, did you know that this concept can be traced to Ancient Greece? In the days of the ancient Greeks, Mother Earth—or Gaia—was a specific goddess who served as the personification of the Earth and the mother of all life on the planet.

According to the ancient Greeks, Gaia was the source of all life on Earth. In her earliest myths, she gave birth to the sky, the sea, and the mountains on her own, without needing a lover to help her procreate.

After bringing forth Uranus, who served as the personification of the sky, Gaia lay with him in order to birth the Titans, who further divided the earth and ruled over it. After the Titans, Gaia and Uranus birthed some of the most powerful monsters in Greek mythology, including the Cyclopes and the Hecatonchires, or giants. Uranus forced Gaia to keep these monsters hidden inside herself, which caused her great pain and led her other children to resent their father.

Most notably, Gaia was the mother of Cronus or Kronos, whom she ultimately assisted in overthrowing Uranus and taking his place as the ruler of the early, pre-Olympian gods.

Aside from her creation and birth of all life, Gaia was most revered for her role in overthrowing her son and lover, Uranus. After Uranus turned on Gaia and began forcing her to contain all of their offspring, Gaia’s youngest son, Cronus, began to despise his father for causing his mother such pain.

Seeing her son’s growing resentment, Gaia created an adamantine or flint sickle, which served as Cronus’s symbol throughout the rest of his reign. Cronus used the sickle to castrate his father and rose to take his place as the ruler of the gods.

After Cronus had fallen prey to the same paranoia and hunger for power that had overwhelmed his father and took to consuming his offspring so they couldn’t overthrow him. Gaia was instrumental in helping Cronus’ son, Zeus, survive and take the throne of Olympus. She counseled Zeus’s mother, Rhea, in how to trick Cronus so that the baby Zeus could escape his father’s wrath and overthrow his throne.

In today’s society, Gaia is still worshiped by many New Age or Neo-Pagan religious groups. Her role in these groups is the same as it was for the ancient Greeks, where she served as both creator and provider.

However, her most lasting influence is found in environmentalist circles. As the mother of the Earth, Gaia is an important symbol of the fragile relationship between humans and the environment, and her name is often invoked as an Earth Mother personification of the planet and the life it holds.

As the creator of life and the mother of gods and monsters, Gaia played an important role in Greek mythology and was the center of worship for many female-led cults or sects within that society. To this day, her legacy is expressed in the reverence we hold towards the earth and towards life itself.