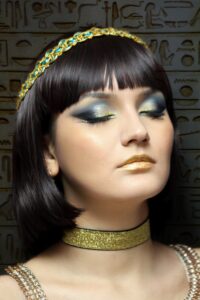 Persephone was the goddess of agriculture for the people of Greece, meaning she was responsible for the harvest being good or bad. She was the precious daughter of Demeter, the goddess of the harvest, but she also caught the eye of the God of the Underworld, Hades. The myth of Hades and Persephone was one of the most popular in Greece during the ancient period of history. Here’s more information about who she was and the stories that surround her:

Persephone was one of the children of the main Greek gods, Zeus, and Demeter. Persephone took her duties and role in Greek culture as the goddess of agriculture from her mother. The importance of agriculture to life in Ancient Greece led to Persephone becoming important to everyday life in Greece. The early versions of Persephone in Greek myths referred to her as Kore and Kora, before her name evolved into Persephone.

The myth of Hades and Persephone was recorded by Homer in his, “Hymn to December” works. Homer wrote that Persephone was spending her time gathering flowers in the Vale of Nysa when Hades rode by on his chariot. Immediately smitten by the beauty of Persephone, Hades determined to make her his wife. The god of the Underworld kidnapped Persephone and took her home to his world. There, Hades held Persephone captive because he was spellbound by her beauty, leading to Demeter searching for her daughter for years.

Eventually, Demeter discovered the truth about the role of Hades in the abduction of her daughter and created a plan to win her back. After making her way to the city of Eleusis, Demeter demanded the people build a temple in her honor, which she used to create a drought covering all of Greece.

The death of the Greek people caused panic among the Greek gods and led to Zeus demanding the return of Persephone. The story ends with Hades offering Persephone a pomegranate seed, which leads to Persephone becoming eternally trapped in the underworld. Zeus eventually brokered a deal to allow Persephone to spend half the year with Demeter and the other half in the Underworld.

Role of Persephone in Greek Agriculture.

The people of Greece were reliant on the crops grown to keep their civilization moving forward. The myth of Persephone explains the changing seasons of the year with the time spent by Persephone in the Underworld explaining the dormant growing season. Persephone remained the goddess of agriculture in Greek culture throughout the ancient period, with the myth helping explain the changing seasons to the Greek people.

The role of Persephone in Greek mythology was vital to the success of the nation in the historically significant period. Zeus and Demeter were important gods and their daughter was given an important status in the canon of Greek mythology. The abduction by Hades is a story that was one of the most often told in the ancient Greek culture to back up the importance of the goddess to the culture.