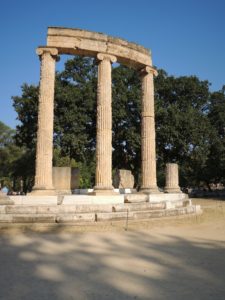 In the modern era, the Olympic Games are a symbolic show of unity between nations. Countries from all across the globe send their best athletes to compete against the greatest in the world. As many already know, the precursor to our modern day Olympics can be traced back to Ancient Greece, but not many are aware of the history of the games and how they came into existence.

How the Ancient Olympics Started

The original Olympic Games were competitions held every four years in honor of Zeus, the king of the Gods. They were equal parts sporting event and religious festival for the Greeks. The first Olympics took place in Olympia, the same site they took their name from, in 776 BCE.

The games would become an event held every four years for almost a millennium, though the games would be in decline due to environmental factors, invasion by barbarians, and changing governance of the region. It wouldn’t be until the year 394, though, that they were officially banned by Roman Emperor Theodosius I, but archaeological evidence suggests they continued unofficially for at least some time after.

Prior to becoming something more akin to what we think of when we hear of the Olympics, the first festival was quite different in terms of who participated. In is known as the Heraean Games, women participated for glory, prizes, and the honor of having their name or portrait inscribed in temples to Hera. Additionally, they may compete to be chosen as the priestess of Hera. A second race followed after that in which men would race to become the woman’s consort once she assumed the role of priestess.

The more traditional Olympics, however, were a man-only affair. Women were even forbidden from watching them lest they be punished by being tossed off a cliff. This change happened barely a century later.

In similar fashion to the modern Olympics, athletes from all across Greece came to participate in the games, though the first few games were almost exclusively attended by those who lived near the stadium for obvious reasons. As their popularity grew, though, they became a major event throughout all of the Grecian city-states, some historians even theorizing that the event held every four years consistently was used as a way to tell time.

The very first Olympics Games was far different from both its modern equivalent and the event it would eventually become. Originally, the only events that took place were footraces. The first event type introduced in 776 BCE was known as stade, or a stadium race, with the second event introduced over fifty years later being diaulos, or the double stadium race. There was also the long-distance race four years after that.

It wouldn’t be until 708 BCE that both the pentathlon and wrestling events were incorporated into the games. From there, many other events like boxing, chariot races, horse races, and even some musical events were added over the next 500 years.

While it’s possible to go much more in depth on the story of the ancient Olympic Games, this should give you a good idea as to how they started, who was part of them, and what they involved. With such a rich history, though, it’s well worth it to look into it further on your own.