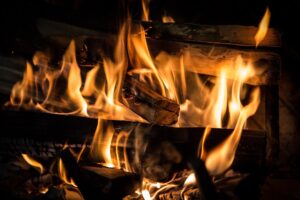 These days, fire is a part of everyday life. It gives us heat, helps us cook food, and even provides us with some enjoyment. The Ancient Greeks marveled at fire and wondered how it came to be. They looked at it as a gift, and they looked at the Titan Prometheus as the reason why this gift existed for mankind. Here’s the story of how Prometheus gave man the gift of fire:

How Do We Know the Story?

It is entirely possible that this story was passed down through the generations through oral tradition. However, we know about the story because of the Greek poet, Hesiod, who told the tale over 3000 years ago. If he hadn’t written about it, we may not know the story.

Hesiod’s description of Prometheus would have an enormous influence on Ancient Roman culture, the society of the Middle Ages, the artists and philosophers of the Renaissance, and modern thinkers up to our own day.

Essentially the story of pride before a fall, the story details the actions of the son of a Titan who dared to steal fire from the gods. In Hesiod’s telling, Prometheus was something of a trickster. He made a sacrifice to Zeus composed of an animal bone wrapped in fat; Zeus was appalled at this insult; and as retribution, decided to withhold the gift of fire from mankind.

Losing fire was a devastating event to humanity. No longer able to cook or warm themselves, men, women, and children lived out lives of misery in a cold world. Thankfully, Prometheus couldn’t stand by and remain indifferent to Zeus’s retribution. He decided to use his cunning to once again trick Zeus.

Zeus Upset at the Theft

Prometheus brought with him the ability to once again cook food and build fires for warmth; he also stole the secrets of metalworking from Hephaestus. This enabled mankind to forge metal and to create tools.

Zeus was furious at this outcome. As the king of the gods, he could not let such arrogance go unpunished without losing face. He made the decision to set up Prometheus as an example to human beings about what happens when we challenge the authority of a god’s decision.

Zeus’s punishment was as swift as it was cruel: Taking him far away from the domain of humans, Zeus chained Prometheus to a rock on a lonely mountainside and condemned him to suffer the torments of having his liver eaten by an eagle. Each day, Prometheus’s liver would grow back, and each day the eagle would once again return to where Prometheus was chained to enact this terrible punishment.

Prometheus would have lived indefinitely like this if it hadn’t been for the heroism of Hercules. According to Greek legend, Hercules rescued Prometheus by shooting the liver-eating eagle with an arrow.