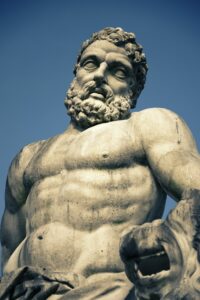 Cronus was the King of the Titans and the father of many of the Olympians, including Zeus, His actions caused there to be a massive war, which then led to the Titans being dethroned. This is when the Olympians took over. Here’s more information about him:

Uranus ruled the universe, and Cronus envied his power. This formed the basis of his actions where he overthrew his father. Uranus angered his wife and Cronus’s mother when he hid her youngest children cyclopes and Hecatoncheires in Tartarus, which was their name for the Underworld.

After this, Cronus became king of the gods and he ruled with his elder sister, Rhea, who also became his wife. This is also why Cronus is traditionally pictured with a sickle.

Cronus and His Children

Cronus visited the Oracle of Delphi and discovered that he would be dethroned by his sons in the same way that he had dethroned his father. To prevent the prophecy from coming true, he immediately devoured all the gods he sired by Rhea after they were born. When Zeus was born, Rhea went to Gaia to help her save him from his father.

Rhea bore Zeus secretly in Crete. She gave Cronus a rock wrapped in clothing, which he swallowed hurriedly, as he thought it was his son. She hid Zeus on Mount Ida in a cave. Versions of the story have him being raised by Amalthea, a goat. Other variants exist where Zeus was raised by either Adamanthea, a nymph, or Gaia, his grandmother, depending on which version of the story you read.

Once he was fully grown, Zeus was given an emetic by Gaia. He used it to make Cronus expel what was in his stomach. The stone came out first, followed by his brothers and sisters. After liberating his siblings, He freed the Cyclopes and the Hecatoncheires, who forged him his thunderbolts, Hades’ helmet of darkness, and Poseidon’s trident. Zeus and his older siblings defeated Cronus and the Titans, who were on his side, with the Hecatoncheires and Cyclopes’ help in an immense war called the Titanomachy. Afterward, the majority of the Titans were restrained in Tartarus.

Cronus cursed Zeus to suffer the same fate. Zeus, however, was warned in time by Prometheus. He avoided a union with Thetis, who would have born the child destined to overthrow him.