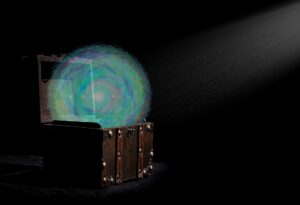 Most of us have heard the story of Pandora’s Box in one form or another. The main takeaway is that in Greek Mythology, Pandora opened a forbidden box and thus gave the world various hardships. Prior to the box’s opening, the world was said to be a much happier place.

As is the case with many of the stories in Greek Mythology, the story of Pandora’s Box is something that attempts to explain why something came to be. Here’s more information about this story:

Pandora’s story is closely linked with the story of Prometheus. As those familiar with Greek mythology know, Prometheus incurred the wrath of the Olympic pantheon when he stole fire and gave it as a gift to mankind. To punish humanity, Zeus created Pandora, the first woman, and presented her to Prometheus’s brother, Epimetheus, to be his wife. The gods gave Pandora a box that they said contained special gifts for mankind.

Although Pandora was forbidden from opening the box, her curiosity eventually got the better of her and she opened it. Removing the seal, Pandora was shocked to see evils such as sickness and hardship come into the world. Frightened, Pandora immediately closed the box, which, according to Hesiod, now only contained hope.

As previously stated, Pandora’s box contained many evils that spread around the world, including illnesses and various hardships that would plague mankind for eternity. However, the box also contained one final object: hope. Over the centuries, storytellers and literary analysts differ on the role hope plays in the myth.

For some, hope remains in the jar as a way for Zeus to show humanity that they must suffer in order to understand that they should never disobey Mount Olympus like Prometheus did in his story. In this sense, the hope in Pandora’s box is a comfort to humanity.

Other literary analysts have a far different interpretation of how hope is used in the myth. Hesiod himself viewed the hope left in Pandora’s box as false hope. By keeping hope in the jar, Hesiod argued that Pandora saved humanity from the emptiness that comes from pursuing false hope. Centuries later, the philosopher Friedrich Nietzsche came to a similar conclusion, saying that hope is the cruelest form of torture.

Poets and artists of the 18th and 19th Centuries developed renewed appreciation for Greek myths and used symbolism found in these stories in their works. In working on a portrait and sonnet on Pandora’s story in 1869, the Italian artist Dante Gabriel Rossetti pondered how Pandora could release all the evils into the world while denying mankind hope to overcome them.

Meanwhile, the French writer Alain Rene Lesage wrote a 1721 play based on the story of Pandora that explored the social implications of her decision to open the box. Turning to Pandora’s village, Lesage shows the once happy citizens vying for power and privilege as the evils of the box make them ambitious and greedy.

The story of Pandora’s Box gives us some insights into the culture of Ancient Greece. Even after thousands of years, the story resonates with audiences as a reminder of the presence of misfortune and evil in the world.