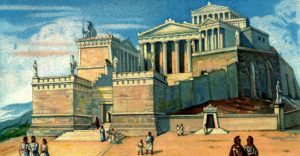 Athens, the capital of Greece, is widely-known to have been named after Athena, the goddess of wisdom. Archaeologists have found that people have lived in the area for over 7,000 years. However, not much is known about how Athens got its name in the first place.

The closest we can get to answers is by examining a myth that seeks to explain how the city was named. In this tale, the gods and goddesses participated in a competition where they bestowed gifts upon the inhabitants of the city we now know as Athens. The god or goddess with the best gift would win. Here’s more information about this story:

An Ancient Creature Ruled Over Attica

Cecrops I was a mythical being who was often depicted as having the lower half of a great serpent in place of legs. He was the king of the Attic Peninsula, also known as Attica, and he ruled for fifty years. During his reign, he founded a city that he called Cecropia and taught the citizens about reading, writing, wedding ceremonies, and other aspects of life that made them more civilized.

Quest for a New Patron Deity

The gods of Olympus were impressed by Cecropia and many of them wanted to become the new city’s patron deity. Athena and Poseidon were especially interested and argued bitterly over Cecropia. Zeus, the king of the gods, ordered them to present a gift to the city and allow Cecrops and his people to choose the gift they liked better. This new competition pitted Poseidon, the God of the Sea, against Athena, the Goddess of Wisdom.

Poseidon Gifts the City a Spring

According to many accounts, Poseidon struck the ground with his trident and produced a great spring. Some say this indicated a promise to make the city a great naval power, and others say he was promising protection from drought. Still, other versions of the myth say that Poseidon created a horse.

The New Patron Goddess is Honored

The Athenians built many temples and held many festivals to honor their new patron goddess. The owl, which was a symbol for wisdom, was sacred to Athena. After the development of money, the Athenians struck coins that depicted Athena and her owl on both sides.

The outcome of this story shows how much the Ancient Greeks relied on the olive tree. Ultimately, it was the olive oil, often referred to as liquid gold, that was the source of much of the Athenian’s eventual wealth.