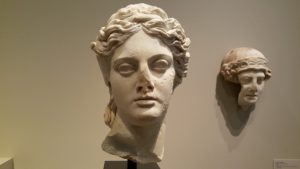 Many have also heard of Hera’s legendary jealousy and wrath and can use those descriptors to paint her in a negative light. She ruled on Mount Olympus and was worshipped as a protector of married women. Here is more information about her and what she was known for:

Zeus is known for having pursued Hera for his wife despite the fact that she was also his sister. Hera initially refused Zeus’ advances, but he didn’t give up. Relying on Hera’s sympathy toward animals, Zeus transformed himself into a cuckoo in the midst of a thunderstorm. Seeing the bird, Hera took it in and held it to her, and that’s when Zeus emerged as the cuckoo and took advantage of her. Because Hera was ashamed of being tricked and used by him, she agreed to marry Zeus. This union was marked by flowers blooming and the exchange of many gifts. Because of this, Hera became the patroness of married women and presided over weddings.

Once married, Zeus was often unfaithful to Hera, and this caused her to become extremely jealous. Hera crafted elaborate vengeance plans against those who wronged her. She would punish unfaithful husbands, and torment those who committed adultery with married men, even if they were tricked into doing so.

Zeus and Hera Have Children

Hera and Zeus had three children together: Ares, Hebe, and Hephaestus. But it is perhaps Zeus’ children not born from Hera that draw the most attention. Athena was Zeus’ daughter, born out of his head after a terrible headache. Athena was the counterpart to Ares, but was considered far more rational than her brother. Hera treated Athena as a daughter, and even supported her in the Trojan War in fighting against Paris.

Hera, though, in response to Athena’s motherless birth, gave birth to Hephaestus without Zeus according to some versions. Hephaestus, however, was born terribly ugly and cast out of heaven by both of his parents. Zeus had many other children with other women, both mortals and gods, and Hera’s vengeance was swift and constant.

Hera’s anger towards Zeus was legendary, and Zeus’ continuous infidelity only gave rise to more of Hera’s wrath. Perhaps most known was Hera’s hatred of Hercules. Hera took vengeance upon both Hercules’ mortal mother and Hercules himself, sabotaging so many of his efforts at success. When Hera found out about Lo, another of Zeus’ conquests, she turned Lo into a cow and demanded that she be brought before her. Lo escaped, but wandered the world as a cow. She turned Lamia into a monster upon finding out about her tryst with Zeus, and Leto became an outcast.