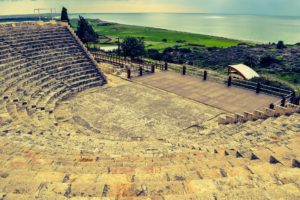 The origins of Greek theater date back to 6th century B.C. and began with festivals in Athens honoring the Greek god, Dionysus. These festivals were used as a way to create a unified identity among the people of Athens. Performance was a powerful tool for the ancient Greeks, and storytelling was an important form of communication in their society.

In ancient Greek theater, only three actors performed on stage at a time, and each performer played several roles in the work’s production. Ancient Greek plays were only performed once, so we have no existing plays from the 6th century B.C. However, the earliest known actor was Thespis, from whom the term “thespian” originated and who became known as the Father of Tragedy.

Elements of an Ancient Play

There were three main parts to an ancient Greek theater: skene, orchestra, and theatron. The skene was positioned behind the stage and as its name suggests, depicted a scenery for the play being performed, aiding the audience’s immersion into the story onstage.

The orchestra was where the chorus danced, sang, and communicated with the actors on the stage. The theatron made up the majority of the theater, where the audience sat to watch the play. It was an open structure built on a hillside to accommodate the thousands of viewers in attendance and formed a circle around the orchestra that enhanced the acoustics of the theater.

Ancient Greek theater centered around three main genres: tragedy, comedy, and satyr. Comedy arose as a result of tragedy plays, and the two are often seen as foils. In all kinds of plays, actors used masks and costuming to create a greater sense of immersion for the audience.

The word tragedy is derived from the Greek words “tragos” (goat) and “ode” (song), owing to the sacrificing of goats to Dionysus. Tragedy plays usually dealt with themes of morality and were derived from Greek mythology. Any character deaths were portrayed offstage, behind the skene, as they were believed to be inappropriate for the audience to watch.

While the origins of comedy plays are uncertain, they likely arose from mimicry. There may also be influence from scenes depicted on decorative pottery and poetry with crude themes. Satyr plays had similar themes to tragedies, but the scenes were acted out in a comic manner.

Ancient Greek theater laid the foundation for what it is today. While acting and theater have evolved, representation of Greek origins still exists. It is evident in in modern theatrical language, practice, and costuming. Having begun as festivals to honor gods and give life to mythology, theater has come to be an ever-changing tradition that has survived for thousands of years!