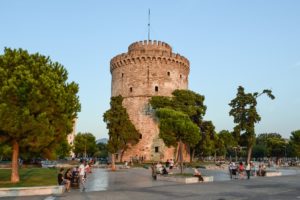 With a population of over one million people, Thessaloniki is the second largest city in Greece and the capital of Greek Macedonia. It is considered to be a top destination in Greece for visitors, and it also has a rich history. While visiting, consider checking out some of these historical sites:

The White Tower of Thessaloniki dates from 1520-1566 A.D. It is a 111-foot-tall structure with six floors that was built as a fortification for the city. White Tower has changed names multiple times since its construction. It was known as the Tower of Blood and the Red Tower before being restored in 1985 by the Byzantine Museum of Thessaloniki. The architecture and history are sure to interest many travelers.

This attraction is close to Aristotle Square and was created by Roman Emperor Galerius. Galerius ordered the construction of the arch and a road running through it to his palace in order to celebrate his victory over the Persians. The original structure itself had three arches, though today only three of the eight original pillars survived. Regardless, the long history of this arch and its symbolism are still a sight to behold.

Right next to the arch of Galerius you will find The Rotunda, which is also known as the Church of Agios Georgios. Built by Galerius in 306 A.D., this monument was intended to be his grave though it was not where he was eventually buried. It was eventually surrounded by a church and converted to a mosque before being restored back to an Orthodox Church again. After that, it was eventually destroyed by an earthquake.

The structure still stands today, restored as a museum which frequently hosts exhibitions. It is a World Heritage Site according to UNESCO and its fascinating history brings people from around the world.

The Archaeological Museum of Thessaloniki houses exhibits of Archaic, Classical, Hellenistic and Roman masterpieces. The museum used to hold the place for the Derveni krater unearthed from the tombs at Derveni and was the first to display the tombs on its inauguration day. The museum has also housed the tombs of the Macedonian kings. After many other exhibitions and reorganization, the museum now holds displays from various cemeteries of various Macedonians dating back to the Neolithic Era.

The picturesque Castle of Thessaloniki is located on a hill above the Old Town, offering beautiful views of the city and the sea. Built on ancient acropolis in the 4th century A.D., the walls of the castle are still visible even today. The castle was renovated in 1444 and has ten towers in total. This structure is filled with history and culture and is sure to delight visitors of any age.

Thessaloniki has a variety of history and culture to explore and you are sure to enjoy these main attractions alone or with family and friends. This city is sure to pique your historical interest and give breath-taking sightseeing views!