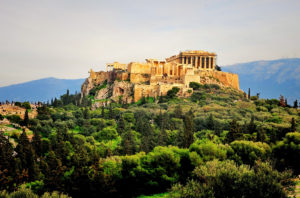 It is well known that the ancient Greeks, particularly the ancient Athenians, developed the concept of a democratic government. The basic premise behind a democracy is that the government is formed from the citizens and they all have a say in the decisions that are being made.

Like any form of government, the Athenian democracy had a specific set of rules. Those who went against these rules were deemed to be against the system. In ancient Greece, this is where the concept of ostracism came from. Here’s more information about what ostracism is and how it developed in ancient Greece:

Ostracism was a special political process whereby people who were considered to be too powerful or dangerous to the democracy were exiled for at least ten years. The process of sending such individuals into exile was determined by a popular vote. In ancient Athens, no one was safe from the process, not even the political leaders. The process was done once a year, and the Athenian citizens would nominate individuals who were deemed as threats to democracy. Hidden political ambitions, dishonesty or just some level of hate towards some people could motivate the nomination.

How Does Ostracism Work?

The process of finding people who were a threat to democracy took place once a year. The first step of the process involved presenting a proposal on whether to hold a vote or not. This proposal was to be presented to the assembly that sat in Athens. This assembly used to meet on the hill of the Pnyx, and the voting process was supposed to be undertaken by 6,000 men.

If the members of the assembly voted their support, the next stage involved holding a special meeting in the Agora. This meeting aimed to cast votes for the candidates to be ostracized. Citizens were divided into smaller groups to maintain order in the process. The voting process was under the strict supervision of the executive council officials.

The Greeks voted against a particular candidate by simply scratching his name on a small piece of pottery. The process was able to preserve the anonymity of the voters. It was such an organized process that nobody could vote twice. For it to be considered fair, a minimum of 6,000 votes was to be cast. Once the process was completed, the officials collected the pottery.

All the votes were tallied, and the officials would then announce the outcome of the process. The candidate with the highest number of votes was ostracized. There was no room for appealing against the results, and an individual was given ten days to organize himself before leaving.

Ostracism was primarily practiced during the fifth century BC. Although it officially started in 506 BC, it wasn’t until 487 BC, when the process exiled its first individual. It continued for the next sixty years, and the last ostracism took place in 417 BC. In ancient Greece, ostracism was only a temporary banishment from society, but the individuals were usually able to come back after the period of time was over.

Find out more information on ostracism and its application to the modern-day through the vignette series, The Greek Guide to Greatness. It was developed by National Geographic and sponsored by the National Hellenic Society. This episode in the series explores the concept of ostracism and what it would mean if it were in use today. Visit this page for more information about Episode 1: Ostracism.