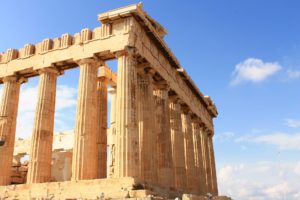 It’s true that the Ancient Greeks were curious about the world in which they lived. It is this curiosity that led them to make many advancements to intellectual thought.This included disciplines like philosophy, mathematics, astronomy, and the sciences. In fact, many of the discoveries that resulted from their curiosity led to the further development of these disciplines.

Tracing the history of science in Ancient Greece can be a slight challenge. People such as Archimedes, Pythagoras, Anaximedes, Hippocrates, Aristotle, Heraclitus, Anaximander and Thales of Miletusall contributed to the wealth of scientific studies and innovations that spawned many of today’s inventions and theories.

However, many of the historical figures who were involved with some of the major discovers also worked in other disciplines. For example, Aristotle was both a philosopher and scientist, and Pythagoras made important contributions to mathematics.

Here’s more information about some of the historical figures that made significant contributions to science in Ancient Greece:

Thales of Miletus is credited with being the “Father of Science.” Although he was born in Miletus, Turkey in 620, B.C., he endowed science history with investigations into basic principles and questioned “originating substances of matter.”

He also proposed theories that explained many events of nature, support of the earth, causes of change and the primary substance. His interest in the heavens led to the beginning of Greek explorationof astronomy.

Science in Ancient Greek history was mainly based upon mathematics, philosophy and logical thinking, along with early technology and everyday existence. Eratosthenes of Alexandria wrote many treatises on geography and astronomy and is given credits in both disciplines. He is given credit for being the first to measure the earth’s circumference.

One of Aristotle’s students, Theophrastus, is known as the “Father of Botany.” He penned a work along with Aristotle where he gave plants names and classified them. He also wrote works that were based on signs of weather, winds, fire, sensations, scents and other varied subjects of scientific interest.

Hippocrates is perhaps the most well-known for his scientific advancements in medicine. In ancient Greece, he was known mainly as a physician in the Age of Pericles and for his contributions to biomedical methodology. He is also known for his directive on codes of professional ethics which physicians today recognize as the “Hippocratic Oath.” He is often referred to as the Father of Modern Medicine because of his contributions.

The contributions the Ancient Greeks made to the sciences were vast, and this was only a brief overview. The bottom line is that the Greeks were committed to finding real answers to questions that they asked concerning how the world worked. They could have easily turned to religion and created stories to find answers, but instead the Greeks were committed to knowing the truth. For more information about science in Ancient Greece, watch this episode of the show, The Greek Guide to Greatness.