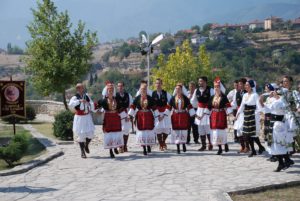 It’s true that the Greek people love to dance, and this is evidenced in the thousands of traditional dances that can be found throughout the country. Many of these dances have been around in some form since ancient times. These dances are present at holidays, weddings, festivals, birthdays, and are even dances for the fun of it any time of the year. The dances listed here are considered to be some of the most popular and recognizable:

The tsamiko is a Pan-Hellenic dance that is typically performed by men, but sometimes by both genders. Tsamiko comes from the areas of Peloponnese, Thessaly, Central Greece, and Epirus. The costume worn during the Tsamiko dance is called Foustanella and is usually worn when both women and men perform the dance. Foustanella is a traditional pleaded-skirt worn by men, similar to a kilt. The dance has a strict tempo and it is performed in a circle with the dancers holding hands. A slower version of the dance can be found in Epirus.

The Hasapiko is said to date back to the days where Constantinople was the prominent center of the Byzantine Empire. It began as a dance that was performed by butchers with swords. The name “Hasapiko” originates from Turkish meaning “the butcher’s dance.” The dance was from the military of the Byzantine era. Hasapiko is a dance than begins slow and quickens its pace and is performed in a circle or a line.

The zeibekiko is another dance that was traditionally performed by men, but women now dance it regularly, as well. It is danced in pairs with the two individuals facing each other with arms wide open. The dancers then perform a series of steps, most of them improvised, while interacting with each other through their movements.

The ikariotikos is a traditional Greek dance from the island of Ikaria. Older versions of this dance are a lot slower than the modern version, but the steps are pretty similar. Men and women perform this dance in a circle, arms in the basket weave hold, while taking walking steps that get quicker as the dance goes on. The most famous song to go with the Ikariotikos dance is one called “My Love of Ikaria.”

The pentozali is a dance that comes from Crete. Its name comes from the fifth (pente) attempt by the Cretans to liberate Crete from the Ottomans. This is considered to be a war dance that is very energetic with high-jumping movements. Since Ancient Greece, the belief here is that dancing would keep soldiers in shape for combat. Dancers hold each other by the shoulders and create a semi-circle, which rotates counter-clockwise. The first dancer in line does dance variations of their choice while the other dancers do the basic steps.

The kalamatianos is a folk dance known throughout Greece. This dance appears in the writings of Homer. The name “kalamatianos” comes from the city Kalamata, but the dance is itself is Pan-Hellenic and known as the national dance of Greece. The kalamatianos is a dance that is performed in a circle with everyone holding hands. The dance can also be referred to as the “syrtos”, with little visible difference between the two. Though the steps between the two dances are similar, the music isn’t quite the same and the beats are slightly different.

The sirtaki is a Greek dance that is known far and wide. This dance is modern compared to the others as it originated in the 1960s. Sitaki was created especially for the movie Zorba the Greek. The sirtaki is known for alternating between fast and slow steps. The dance is performed in a circle or line with dancer’s hands placed on the shoulders of the person next to them. It is said that this dance mimics the “drunken walk” home after a night of drinking in the tavernas.

Traditional Greek dances are an important part of the culture, lots of fun, and bring people together to celebrate life. When you learn these dances, you are able to experience the Greek culture first hand!