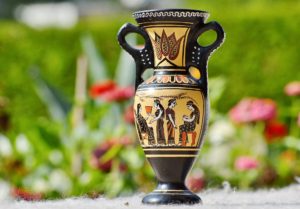 One of the things the Ancient Greeks are known for is the art that the culture produced, mainly because we can view examples of it today. The art took a leap forward during the 5th Century BC when General Pericles of Athens decided to use public funds to support local artists and artisans. With this money, they created impressive architecture and set in motion the Classical period of Greek art, which spread to other forms of art, such as sculpture and pottery. Here’s more information:

It was during the time of Pericles that a pair of architects named Kallikrates and Iktinos collaborated with a sculptor named Pheidias to build the Parthenon in Athens. This was a grand temple dedicated to the goddess the city was named after: Athena.

The foundation of the Parthenon was the Acropolis, which was a limestone hill that sat above the city. The Acropolis was also the foundation of other structures that were built during the same period and in the years after it. This included a gateway called the Propylaia, which was built by an architect named Mnesikles.

The Parthenon had a rectangular stone platform as well as a pair of porches and columns grouped in rows. It also had a small interior room, which was not for worshipers — who generally remained within the structure’s exterior — but instead housed a statue of Athena.

Temples built during the Classical period had similar architectures. This included columns in groups of rows, a superstructure of moldings and bands placed horizontally above the columns, and roofs in the shape of triangles. The roofs themselves contained pediments with collections of sculptures. Originally, these sculptures were not only painted but also had painted backgrounds. However, over time the paint faded and all that remains today is the white marble.

The architects of Ancient Greece were noted for their ability to create proper proportion and perspective. They built planes that tilted slightly upward at their ends, and the columns they constructed were wider in the middle than at their ends as well. They did this so that the structures would appear to look straight and level when viewed at angles that would ordinarily distort such structures.

It is unfortunate that there are few extant examples of Classical Greek sculpture. The stone material sculptors used during the period easily broke apart, and they often smelted metal ones. Still, from what has survived we can tell that great advances occurred in sculpting during this period.

While Archaic Greek sculptures looked unnatural, Classical sculptors such as Pheidias, Polykleitos, Skopas and Lysippos had a deep understanding of both anatomy and perspective, and they applied the rules of both to their sculptures. As a result, these sculptures looked realistic.

Pottery in the Classical period included small earthenware figures that Greeks at the time used for various purposes, including as toys, as gifts for the gods and as ornaments to be buried with the dead. They also used clay to create jars, vases and pots. These items were painted them with scenes that became more realistic over time.

The Classical period of Ancient Greece can be reflected on as a time when art as we know it began to take shape. This period set the backdrop for the Greeks to create some of the most memorable pieces of art in Greece’s history!