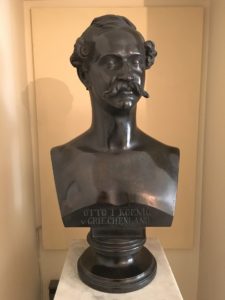 After Greece won its independence from the Ottoman Empire, what ensued was an extremely turbulent time period. The country had some trouble establishing a form of government after occupation was over. After a few false attempts, a king was brought in from another kingdom. King Otto I was originally a Bavarian prince, but he ended up becoming the first King of Greece. Here’s more information about him:

Born in Austria in 1815, it didn’t seem too likely that the young Otto would one day be the king of Greece. His connection to Greece was quite loose and tangential; he could claim very distant relation to two imperial dynasties of the Byzantine Empire. At the time of Otto’s birth, Greece was still under the control of the Ottoman Empire.

In 1821, the Greek people rebelled against their overlords and claimed their nation’s independence. After this, the rest of Europe didn’t really recognize Greek statehood. Instead, the great powers saw Greece as little more an autonomous region of the Ottoman Empire.

Greece had been in chaos for a while because many factions tried to gain control of Greece. Ultimately, Greece was formally recognized by the European powers following the Treaty of London in 1832.

One of the primary goals of the Treaty of London was to establish new leadership for the fledgling nation. The parameters of the treaty were largely dictated by the three great powers of the time — Britain, France, and Russia. An independent Greece favored all three powers by undermining Ottoman influence on the continent. However, no nation wanted any of the other nations to have excessive influence over the country.

With it being agreed that Greece needed a monarch who wasn’t British, French, or Russian, they decided to scour the minor powers of Europe for a candidate who had any tangential claim to this newly-established Greek throne. Eventually, they found a Bavarian prince who met these qualifications, and that’s how Otto I got his title.

Upon arriving in Greece, there was a sense that the 17-year-old Otto I was out of place. He didn’t speak Greek, and he had grown up in Bavaria his entire life. Worst of all, he wasn’t Orthodox Christian. As he was a Roman Catholic, a foreigner, and a very young man, the Greek people were not very happy about his status as their king. He tried to impose a very rigid Bavarian-style government structure on the Greek people, and this was not something that they were used to.

However, he and his ministers did establish a fledgling military, educational system, justice system, and general administration. Despite this, things were difficult for the new king. Greeks were not receptive to his top-down system of governance, and they wanted to establish a parliament.

King Otto didn’t want to establish a parliament and the conflict was one of the things that caused the Revolution of 1843. Eventually, he agreed to the parliament. He allowed the
new Greek National Assembly to enact a constitution. Despite the new constitution, King Otto I still dictated much of the government’s policies, and this angered the Greek people and their representatives. The King’s dismissal of the Greek prime minister in 1862 was the straw that broke the camel’s back, and Otto I was forced to leave the country, never to return.

In 1864, the great powers gave the throne to a Dane who would be known as King George I, and the country adopted a new, more democratic constitution. Otto lived out the rest of his days in exile, lamenting his expulsion from the country he once ruled and still claimed to love. He continued to dress in Greek regalia until his death in 1867.

King Otto I may not have been popular, but he is an important part of Greece’s modern history.