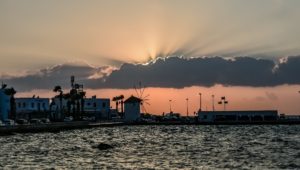 Greece is filled with wonderful places that are worth exploring. It’s true that some destinations are more popular than others, however, each place has its own special charm. Islands like Paros, for example, may be small, but they are all filled with plenty of things to do. Here’s a look at some of the things you can do while here:

While Paros is a small island with an area of no more than 64 square miles, it boasts dozens of beaches. About two-thirds of them are sandy beaches, while the rest are pebble beaches. The more popular beaches have hotels, restaurants, and other attractions, and some of the others are quite secluded. Some of the beaches have facilities for activities like diving, windsurfing, and water sports. A few allow nude bathing.

During the 13th century, the Venetian Duke of Naxos, Marco Sanoudos, built a castle in Parikia, the capital of Paros and its largest town. Parikia is located in the northwestern part of the island. The Frankish Castle incorporates pieces of older buildings. Parts of it, for example, were originally a temple built in 530 B.C. Its tower includes elements from the 4th century. The Frankish Castle is also known for its elaborate stonework.

The Archeological Museum of Paros, which is also in Parikia, was built in 1960. Its original purpose was to house a collection that was then stored at the Monastery of Ekatontapyliani. The museum, which was expanded in 1995, contains artifacts dating from the Neolithic to the days of the early Christians.

Spend Time at the Valley of Butterflies

The Valley of the Butterflies known as “Petaloudes” in Greek, is about 3 miles south of Parikia, and it is also near the Monastery of Jesus of Woods. The valley boasts dense vegetation including trees like oleanders, carob trees, and cypresses.

The butterflies are actually Jersey tiger moths, day-flying moths that are drawn by the aroma from the trees. The butterflies are brown with pale yellow stripes. They first appear in June and remain on the trees throughout the summer before laying their eggs and dying.

Although Paros is a small island, it has a long history and a variety of attractions. While here, you will find that there is no shortage of things to do!