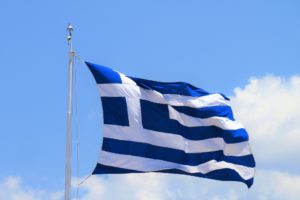 March 25th is a day of celebration in Greece as the people celebrate their Independence from the Ottoman Empire. This date is a symbolic one, chosen to represent the beginning of the movement that led to the Greek War for Independence. The successful conclusion of that war gave the Greek people their freedom. Here’s more information about the history of this holiday:

The Greek people quickly grew tired of oppression but did not feel in position to rally against Turkish armies for several generations, in fact several centuries. Political, social and economic compromises were struck and broken since the mid 1400s between the Ottoman Empire and the small island territory of Greece.

The culminating revolt finally struck in 1821 when Bishop Germanos of Papras rallied the resounding battle cry “Freedom or Death” and established a revolutionary flag and credo. Fellow soldiers quickly followed suit, creating national momentum that resulted in successful skirmishes and many minor victories against the occupying Turks.

Unfortunately, the bigger and more established Ottomans took advantage of the inexperience and infighting among Greek armies and gained one stronghold after another. Even their quasi-guerilla tactical forces were compromised when plans for an insurrection were uncovered by the enemy. Conditions continued to worsen for the Greek soldiers, but they were not a people who were inclined to give up easily.

Support from Other Countries

Another turning point in the War for Greek Independence came when outside forces from Russia, France, and Great Britain, joined Greek efforts. In particular, Great Britain followed the ensuing trouble closely and was moved to provide early support efforts on behalf of national interests against the Ottoman Empire. The Ottoman armies were not alone in their struggle and enlisted the aid of national parties from African affiliates including Egypt, Algeria and others that brought armed soldiers, strong ships, and much needed supplies to the front lines.

The signing of the Treaty of Edirne in 1829 not only established Greece as an independent nation but also brought the official end to the Russo-Turkish War and the Greek Revolution. As a by-product, it also restored a balance of power that was not in favor of the Ottoman Empire and effectively ousted their reign.

Week long festivities have evolved over the years and include everything from somber religious appreciation and contemplative prayer to parades that are held worldwide. In recognition of the underdog who overcame the giant, Greek Independence Day has become something of a symbol of victory and survival for all oppressed peoples.

Celebrations featuring Greek nationals appear at the end of March in many countries around the world, including the United States, Germany, France, Great Britain, and many more. Traditional dishes, costumes, sacred scripture reading, and other activities are used in celebration of Greek Independence.