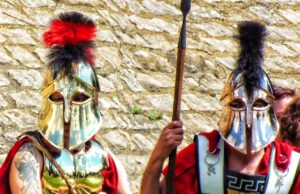 Greece was one of the most influential countries in the ancient world, but it also had a turbulent history. There were wars, occupations, and political turmoil that played a big part in shaping the society. At one point in their history, citizens of Ancient Greece found themselves under Roman control. Here is more information about this time period:

Roman Occupation pretty much coincided with the fall of Hellenistic Greece at the conclusion of the Battle of Corinth, around 146 BC. In the aftermath of this battle, the Roman Republic annexed Macedonia, placing the Greek peninsula under Roman rule. Southern Greece retained autonomy from the Romans but was still influenced by the much more powerful foe. Despite several revolts, over the ensuing decades, the rest of Greece slowly came under the Roman noose.

At the Battle of Actium in 31 BC, the Romans effectively destroyed Hellenistic Greece by defeating the Egyptian Pharaoh Cleopatra VII, the ruler of the last Hellenistic kingdom, and Mark Antony, her Roman ally. Despite the destruction of war, Roman occupation proved highly beneficial for Greece. The Romans reorganized the economic and administrative system of Greece and rebuilt several Greek cities. The end result of this, the Athenian schools and the educations they provided thrived.

Greece in the Age of the Early Roman Empire

During the early era of the Roman Empire, Greek culture penetrated the top tiers of Roman society. Many Roman nobles, including the famed general Scipio Africanus, regarded Greek philosophy and customs as the height of culture. This interest in Greek thinking influenced multiple areas of Roman society, including literature. Virgil’s famed Aeneid drew much inspiration from the Iliad and the Odyssey by Homer.

Romans were further enamored with Greek athletic competitions, such as the Olympic Games and the Isthmian Games. Emperor Nero himself even competed in the Olympics of 66 AD. During this time, which is also known as the Pax Romana, Greece became one of the most important shipping hubs in the world, effectively connecting the eastern and western halves of the Roman Empire. The early Roman Empire era also saw many Greeks convert to Christianity due to the teachings of the Apostle Paul.

Historical and archeological evidence suggests that while the western portions of the Roman Empire fell into decay in the third and fourth centuries, Greece remained one of the most prosperous regions of the empire. Despite this level of affluence, Greece nonetheless remained the target of invasions by numerous groups, such as the Germanic Vandals and Goths. Due to the might of the Roman military, Greece was able to repel invasions by these groups.

It is no secret that the Roman Empire influenced Greece during its occupation. However, the occupation eventually ended as Greece entered into the era of being controlled by the Byzantine Empire. This continued until this empire fell and Greece eventually fell under Turkish occupation.