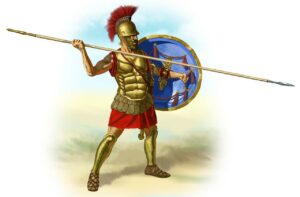 The impact of the Ancient Greeks can still be felt today. The mathematical principals developed in Greece back then, for example, are still being taught in schools. The same is true for philosophy, science, astronomy, and even medicine.

However, Ancient Greece was not just a peaceful era filled with learning and advancement. There were plenty of battles over the years that helped to shape Ancient Greece as well. Here is some information about the top battles of Ancient Greece:

After the Ionian Revolt, the Persian Emperor Darius I decided to punish Athens, Sparta and other Greek cities for supporting the uprising. In 490 BC, he dispatched a large military force to the Greek Peninsula. His ships landed near Marathon.

The Athenians sent an army under Miltiades to defend Athens. Together with allies, they positioned their forces about 25 miles outside the city. The Athenians sent a messenger to request assistance from Sparta; he reportedly sprinted across 150 miles in two days. However, Sparta could not supply soldiers due to an ongoing religious festival.

When Miltiades learned the Persian cavalry had temporarily departed from the camp, his army attacked the Ancient Greeks outside Marathon. They fought fiercely and prevailed over the larger Persian army.

Ten years later, Xerxes I of Persia decided to carry forward his predecessor’s campaign. He sent a large army into the Greek Peninsula. They marched south.

In August, Sparta and its allies moved to intercept this advancing Persian force. King Leonidas of Sparta stationed his soldiers in a narrow mountain pass in Central Greece called “Thermopylae”. It proved almost impossible for the powerful Persian army to capture this location amidst rugged terrain.

When the Persians discovered another route around their position, Leonidas sent most of his army to defend other sites. He remained with some 300 Spartans (and possibly some allies) on a doomed mission to delay the advance of the much larger Persian force. A bloody three day-long fight ensued. Leonidas and his Spartan soldiers all perished during this famous battle.

In September, the Persian forces suffered another significant setback. Emperor Xerxes I had sent some 800 galleys to support the capture of Athens. The Athenian leader Themistocles persuaded the Athenians and their allies to use their fleet of 370 triremes to engage the Persians at sea.

The Persians sent their navy into the narrow strait between the Island of Salamis and the Athenian port city of Piraeus. Themistocles chose to attack them there, realizing their ships would have difficulty maneuvering in the treacherous waterway. The battle of Salamis successfully defended Athens and resulted in significant damage to the Persian fleet.

The following year, in 479 BC, Emperor Xerxes I placed Mardonius in charge of Persian forces on the Greek Peninsula. Mardonius established a fortified encampment at Plataea. Greek forces allied against Persia successfully lured the Persian army away from this protected fortress and ambushed them, obtaining a decisive victory.

These battles were not only important to Ancient Greece, but the repercussions of them were felt throughout the world. The Greeks’ success at these battles ultimately caused the Persian Empire to lose its strength. After they were not able to conquer Greece, their hold over the world began to crumble.