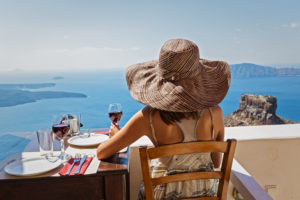 Modern Greek wines are now emerging in the rest of the world. Greece not only offers wonderful value for its wine, but the many varieties will help expand your palate and wine interests. Here’s what you should know about Greek wine.

Greece is one of the oldest wine-producing regions in the world and dates back 6,500 years. As people migrated to Greece from other areas they brought with them their grape vines. As groups settled and grew, the wine production in Greece did as well.

The most reputable wines of ancient Greece were Chian, Coan, Mendaean, Rhodian, and Euboean just to name a few. Excavations at ancient settlements have brought to light the remains of Vitis Vinifera vines and the remains of wine presses have been found in Crete. Hippocrates, a Greek physician, used wine for medicinal purposes and would prescribe it to his patients. Wine has played a large role in Greece’s history and culture. Ancient Greek writer Euripedes said, “where there is no wine there is no love.”

There are many varietals of Greek wine, but here are six you should know about.  Here’s more information:

Greece is diverse in terms of climate and this makes for varied wines from the different regions.

The wines of Greece have a long and interesting history and wine lovers throughout the world are certain to enjoy it!