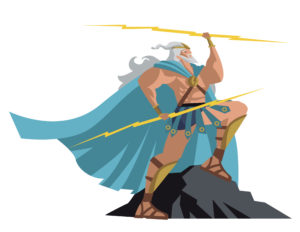 Today, the dominant religion in Greece is Orthodox Christianity. However, there was a time when the people had different beliefs. Many of the stories about the gods and goddesses have survived and we learn about them as part of our heritage. Here’s a look at the twelve main gods and goddesses who were said to have lived at the top of Mount Olympus:

Zeus was the god of the sky and thunder and the most powerful of the Twelve Olympians. The other gods and goddesses recognized him as their king. His chosen weapon was the thunderbolt, which was mad for him by the Cyclops.

Apollo was the god of music, poetry, the sun, prophecy, and medicine. He was the son of Zeus and Leto and twin brother to Artemis. In addition to having many love affairs with women, Apollo also had romantic relationships with men, including Hyacinth and Cyparissus. After their deaths, Apollo had them transformed into a flower and tree.

Artemis was the goddess of the hunt, wildlife, and chastity, but was also known for her vengeance and wrath. When the Theban hero Actaeon accidentally saw her bathing naked, Artemis turned him into a stag and he was torn apart by his own hounds.

Aphrodite was the goddess of love, beauty, and fertility. She was married to Hephaestus and the mother of Eros (cupid), Phobos, Harmonia, and Anteros to name a few. During the Trojan War, Aphrodite fought on the side of Paris.

Dionysus was the god of wine, ecstasy, and fertility. He was the only Olympian to have a mortal mother (parent) and the last to enter Olympus.

Demeter was the goddess of agriculture, grain, and harvest. She was the mother of Persephone, who was abducted by Hades and taken to his underworld kingdom. When Demeter went in search of her and neglected the earth, the crops failed and famine spread. Hades would return Persephone only if she were allowed to spend one third of the year with him. This, in turn, created the seasons.

Athena was the goddess of reason, wisdom, arts and crafts, and war. She was popular in Athens, as she helped many heroes including: Jason, Perseus, and Heracles. She would be worshipped as the city’s patroness. The Parthenon was built on the Acropolis to honor her.

Hera was the goddess of marriage and family. She was Zeus’ wife and sister and extremely jealous. She would take out her jealousy on Zeus’ lovers as well as on their children.

Poseidon was the god of the sea, earthquakes, and horses. He is best known for his trident. While he spent much of his time in his underworld kingdom, unlike his brother Hades, he did live on Mount Olympus occasionally.

Hephaestus was the god of fire and metal working. He would entrap his wife Aphrodite and her lover Ares in a fine metallic net as revenge for her cheating on him.

Hermes was the god of commerce, patron of travelers, conductor of the deal souls into the underworld, and messenger of the gods. He is thought to be the father of Pan, a half-goat, half-man god of shepherds.

The gods and goddesses of Mount Olympus were passionate, heroic, vindictive, and jealous, and many of their traits have helped contribute to our human experience.