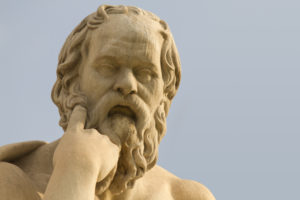 In modern times, Socrates is seen as one of the leading figures in ancient philosophy.

Little is known about this famous Greek philosopher, however, what we do know is mostly thanks to the records of one of his students, Plato. Almost all contemporary descriptions of Socrates agree that he was an Athenian man renowned for his brilliant intellect, radical views, and infamous death.

Socrates was born around 470 BCE in the city state of Athens to Sophroniscus, a stonemason, and Phaenarete, a midwife. He started out as a stonemason, but eventually joined the Athenian army as a hoplite. Socrates’ military career led him to be part of the Boule, the leading council of Athens, and he was involved in important trials. Socrates gained fame for his brilliant wit and complex arguments, and he developed a philosophical following.

Famous students of Socrates include Plato and Xenophon. While he was alive, Socrates was the subject of several satirical plays and a lot of controversy. His critics argued that his obsessive study into the meaning of language and the purpose of nature led him to be atheistic and amoral. In his later years, Socrates married Xanthippe, a much younger woman and together, they had three sons. Others described her as unreasonably unpleasant, but despite the fact that they argued frequently, Socrates said he chose her because he appreciated her argumentative nature.

Socrates was most famous for developing the Socratic method. This teaching method uses a series of questions to encourage another person to question their own beliefs and come up with new answers. His philosophy focused on questioning the nature of knowledge and virtue. Socrates argued that virtue was innate, not taught, and he argued that the pursuit of virtue was more important than wealth and social standing. Socrates’ work laid the foundations for Plato and further philosophers. His ability to teach through debate and questioning became a key part of further philosophy.

Socrates claimed to be very loyal to his city, but he felt it was his duty to criticize its actions and morals. Many Athenians worried that Socrates had too much power among young intellectuals, and they worried that he was a bad influence. His public support of Sparta, Athens’ historical enemy, and his close friendship with a general who defected to Sparta, led to further concerns.

In 399 BCE, Socrates was arrested and placed on trial for corrupting the youth and being impious against the gods of Athens. A jury found him guilty and sentenced him to death. HIs followers planned an escape for him, but Socrates refused to flee. Instead, he chose to remain and drink poison hemlock, a slow poison that causes paralysis.

Although his radical views and the actions of his life led to his death, history looks at him much differently. He had a big impact on Grecian philosophy, and his students Plato and Aristotle went on to create much of the foundations for Western philosophy. The Socratic method is still used today to teach pupils by encouraging them to carefully examine concepts.