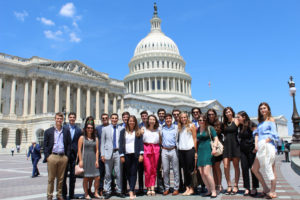 What will participants learn?

During a lunch and meet and greet, students of the Heritage America Program will meet with people such as Greek American local state representatives, head of local organizations, former high-ranking Greek American government officials, and prominent academics and media professionals. Through meeting these people, the students will learn about the many modern-day American principles and practices that are very similar to those of the Greeks during the Golden Age and the true impact that Greece has had on America. Participants will also learn about how Greek Americans rose in just one generation as some of the most educated and successful immigrants. They will even learn how the Boston Marathon is connected to Athenian soldiers who ran 26 miles home in 490 BC to preserve liberty and democracy.

Meeting with people who are from the same background and have achieved so much is inspiring for young people and is not an opportunity that everyone is able to have. Instead of just hearing the stories (or hearing nothing at all), they get to meet people face-to-face, listen to their personal stories, and ask questions. This type of learning experience has a great impact on people and will be something they don’t soon forget. After the program they will see things in a different way. They will feel more personally connected to events and places. They may also feel moved to share what they have learned with others. They will have a new sense of pride about who they are and where they come from, both Greece and Boston.

What places will participants see?

Places that are of importance to Greek history and culture around Boston will be visited. During the program, students will visit sites such as the Hellenic College Holy Cross in Brookline, Beacon Hill – Loiusburg Square, the Massachusetts State House, the Hippocrates statue at Boston University Medical School, the Museum of Fine Arts, where Greek and Roman art will be explored, and the Consul General of Boston. To see examples of Greek Revival Architecture participants will also see the Boston Public Library, Faneuil Hall, St. Paul’s Church, Parnassus Center, and Roslindale Square Cathedral Church.

The National Hellenic Society strives to perpetuate the values and ideals that embody the Hellenic culture. Through programs such as the Heritage America Program, they are able to teach the young and get them interested and involved in knowing about their past and continuing it into the future.