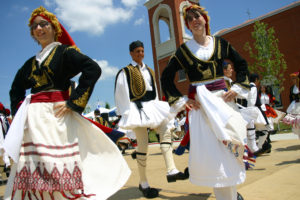 Folk dancing is a large part of Greek culture, ever present since the days of ancient Greece. Greece has thousands of unique dances, and each region has its own styles of variations. Many dances even have their roots in ancient times. For the Greek people, these dances are about more than just entertainment – they are a deep and significant part of the culture. Here is a look at the history of Greek folk dancing:

There is some cultural evidence that dance existing in ancient Greece. Writers such as Plato, Aristotle, Plutarch, Herodotus, and Lucian mentioned dance, and it was even referenced in Homer’s The Iliad.

“The dance of the youths and maidens is distinctive. It is a ritual dance performed with great care, by dancers scrupulously dressed in their best garments. It is made up of a crisp, rapid, circular figure, followed by a movement of two lines in opposition to one another.”

In ancient Greece, dance was synonymous with being educated. Those who had received a good education were also taught how to dance. Each dance had a purpose, and some were even associated with religious celebrations. Other purposes for dance back then included to increase fertility, to prepare for war, to celebrate happy events like weddings, and even to cure an illness. There were even professional dancers in ancient Greece!

There are those who believe that today’s Greek dances have been derived from the dances that were common in ancient Greece. Although there are thousands of dances in Greece, most of them fall into one of the major categories of dances. Most dances are done in a circle, but there are some that are to be performed solo or with a partner. There was also a time when men and women were not allowed to dance together, but this is no longer the case. For example, many of the leaping dances were reserved only for men, but this has changed and women participate in them, as well.

There are several different categories of dance and for the most part, the dances are broken up by region. However, there are still some dances from ancient Greece that are still being danced today. The following is an overview:

There are also other regions of the world that were known to have sizable Greek populations, such as Asia Minor and Pontus. While these regions are no longer part of the Greece, many of the Greek traditions do remain.

Greek dancing is truly part of the way of life. In order to really understand the Greek culture, it is a good idea to also learn some of the dances.