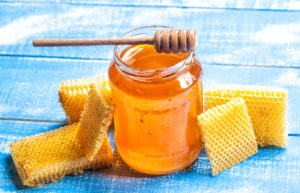 Honey is popular throughout the world and Greece is no exception. Greek honey is renowned for its unique taste and history, and it is a particularly celebrated delicacy among honey enthusiasts. After all, being known as the “Nectar of the Gods” for over 3,000 years shouldn’t be taken lightly! It also has a special place in Greek cuisine and is often the main sweetener. It can be found in dishes such as Baklava and Kataifi, and is also used to sweeten tea.

Why is Greek Honey Unique?

Greek honey is world-famous for a reason. Data found that Greece has more honey hives per acre than any other European country. The honey that comes from Greece is considered by many tasters and enthusiasts to be the finest in the world because of numerous ecological variables.

The presence of unlimited summer sun and the tremendous biodiversity of the countryside are known to contribute to the taste of the honey. There are over 850 species of flora found in Greece that are not available anywhere else in the world! Geologists and botanists find Greece fascinating because of the rich variety of flora found in the Mediterranean basin. With so many variables factoring in, it makes sense that Greek honey is held in such high regard.

Greece has a rich history featuring honey as a central food staple and medicine. Since ancient times, honey has been used as a natural sweetener, whether added as a topping to other foods or used as a central ingredient in things like baked goods and grilled dishes. Greek honey, in particular, is unique because of how it separates itself from other types of honey in terms of taste, color, and smell. There are richer qualities to Greek honey, and Greece has enjoyed remarkable trade relations with other countries in the region because of how unique Greek honey is.

Honey has been used as a part of medicinal therapy because of its antibacterial qualities. Hippocrates, the Father of Medicine, wrote that honey and pollen were ideal for cleaning sores and ulcers. It has been used as a solution for sore throats and other oral issues just for that reason. One of the most famous cold symptom relievers is honey and lemon juice, a simple recipe still used to this very day. Honey is also famous for its antioxidant qualities. This allows it to stand out as an excellent food option to add to any diet, as its antioxidant qualities help repair cell damage and prevent deterioration in the future. Its versatility and variety makes it particularly valuable for foodies and honey connoisseurs.

No matter what you’ll be doing with it, it is worthwhile to take the extra step to find honey from Greece. This is especially important if you are cooking Greek foods. Using authentic Greek honey will make the dishes extra special!