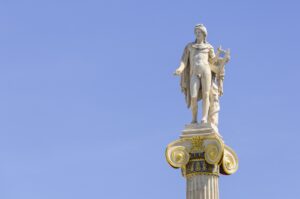 Apollo is one of the most important Olympian Gods in Greek Mythology. He was the god of the Sun, of Healing, and Prophecy. Apollo is also known as Phoebus in Greek Mythology. He is the son of Zeus and Leto and the twin brother of Artemis. Apollo has often depicted as a young man with golden hair and a golden lyre. He is also sometimes shown riding a white horse. Apollo was an important god in the lives of the ancient Greeks. He was thought to bring good luck and to be a protector of the people. Apollo was also considered to be able to cure diseases.

Whichever story is true one thing is sure – Apollo was born to be a god. He is the son of Zeus, the king of the gods, and Leto, a Titan goddess. His birth was said to be accompanied by great light and fanfare. Apollo is often depicted as a young, handsome god with golden hair and a radiant smile.

Apollo, the Greek god of the Sun, is said to have had many love interests. One of his most famous loves was the nymph Daphne, whom he pursued relentlessly until she was turned into a laurel tree to escape him. Apollo also had a love affair with the Muse Calliope, with whom he had a son, Linus. Apollo was also said to have had a relationship with the goddess Aphrodite.

Apollo, the god of the Sun, music, and poetry, was one of the most well-known gods of Greek Mythology. He was also associated with the arts, and his influence can be seen in many aspects of Greek art. For example, the idealized human form that was often used in Greek sculpture was inspired by Apollo. This can be seen in Apollo’s statues that were created by famous Greek sculptors such as Phidias and Praxiteles. Apollo was also often depicted in Greek paintings, usually as a young man with a radiant face and golden hair. His image was used to represent the ideal of beauty in Greek art.

Apollo is known for his incredible beauty. He is often depicted as a young, beardless man with long hair and a laurel wreath, depending on the source of the art. He is one of those gods that is definitely worth learning about.