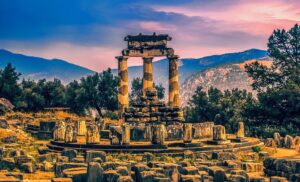 Mythological stories are all very much a part of Greece’s past, and it is sometimes easy to forgot that the stories aren’t an actual part of the history of the country, especially when some of the places that are mentioned are actually real. No trip to Greece is complete without taking the time to explore how Greek mythology shaped this country! Here are some of the best places to visit in order to learn about Greek Mythology:

On the idyllic island of Crete, you will find Minotaur’s Labyrinth. This interesting attraction is located at Knossos Palace. As the capital of Minoan Crete, this archeological site is rich in history and fascinating ruins. A highlight of the trip to the palace is a visit to the labyrinth. Ancient Greek legend has it that a minotaur was living in this vast labyrinth. Visitors can check out the site on their own or choose to take a guided tour to enhance the learning experience. You will find this site approximately twenty minutes south of Heraklion.

The archaeological site at Delphi is home to the legendary Oracle of Delphi who is mentioned in both historical accounts and mythological tales. The Ancient Greeks considered Delphi to be the center of the world with the stone monument called the omphalos marking its place. This massive archeological site is located on the southwestern slope of Mount Parnassus, boasting recognition by UNESCO as a World Heritage Site. There are numerous attractions to visit while spending time in Delphi. The Archaeological Museum is home to historical statues and treasures from the many excavations that have taken place over the years on this site. You will find the Temple of Apollo, the Ancient Theater, and an ancient stadium here, as well.

One of the five rivers of the underworld, the Archeron River plays a prominent role in Greek mythology. The 32-mile long river is located in the Epirus region of northwest Greece. In ancient times, this river was known as the “river of woe.” There are a number of villages that line the river, making it easy to find a spot to stake out to check out the natural landscape. Although it is a real place, it is easy to visit this river and get swept up in the lore of Greek mythology.

Boasting the distinction of the highest mountain in Greece, Mount Olympus is a true sight to behold. As the fabled home of the Olympic Gods, this peak attracts visitors from all over the world. This Greek national park features a diverse flora and fauna landscape, adding to its allure. Visitors can even participate in guided tours to the peaks of this vast mountain. You will find Mount Olympus on the Olympus Range, located on the border between Thessaly and Macedonia. The area of Pieria has been declared an archaeological and historical site.

Visit these places to catch a glimpse of Greek Mythology! As you immerse yourself in the history of these sites, you will learn more about the Greek people and the legends that shaped their culture.