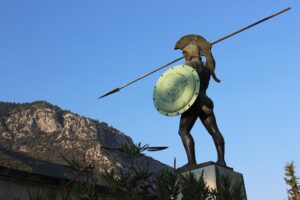 In the history of the ancient world, the Battle of Thermopylae stands out as one of the most important engagements for the fledgling Greek city-states. Fought over three days in 480 BC between an alliance of Greeks led by the Spartan King Leonidas and the Achaemenid Empire led by King Xerxes, Thermopylae is best remembered for the last stand of the 300 Spartan warriors, who held off the Persian army to give their comrades time to withdraw from the field. Here’s a look at the details of the battle:

Causes of the Second Persian Invasion of Greece

Xerxes’s decision to invade Greece is rooted in his father Darius’s failed expedition against Athens in 490 BC. Seeking to avenge his father and expand the Achaemenid Empire’s influence into Europe, Xerxes mustered a massive army to subdue the Greeks. While ancient sources say that the Persian army numbered over a million men, modern historians estimate that Xerxes’s forces probably consisted of around 100,000 to 150,000 soldiers.

Once Xerxes had brought his forces together, he crossed into Europe through a massive pontoon bridge at the Hellespont. Seeing the massive size of the Persian army, many Greek city-states capitulated to the Persian king’s demands for tribute. Others, however, joined an alliance led by Athens and Sparta to resist the Persian force.

Information About Battle of Thermopylae

As the Persian forces slowly made their way through northern Greece, leaders of the allied city-states knew that they had to delay the Persian army for as long as possible. Military planners knew that it would take time for them to get their armies together. As such, a small force of about 7,000 soldiers was sent to the pass of Thermopylae to slow the Persian advance. Thermopylae was chosen because it was a narrow pass in the mountains that would negate the Persian advantage in numbers.

For the first two days of the battle, the Greeks were able to hold the Persians in check. The Greeks fought in a phalanx formation, which featured a wall of shields with spears facing the enemy. Late in the day on the second day of the battle, a local farmer named Ephialtes betrayed the Greeks, showing Xerxes a secret pass around the Greek lines.

Knowing that his forces were encircled, Leonidas formed a rearguard of his 300 Spartans and around 2,000 other soldiers to let the rest of the Greek army escape. Charging into the Persians, every single Spartan died in the engagement.

Xerxes’s victory at Thermopylae came at a huge cost to his army, with many sources numbering the Persian dead at 20,000. Once Xerxes had secured Thermopylae, he swept into Greece, destroying much of the countryside and burning Athens to the ground. Using their advantage in ships, the Greeks destroyed the Persian navy at the Battle of Salamis, ending the Persian threat and forcing Xerxes to withdraw from the country.

In the end, the Battle of Thermopylae is important because it prevented Greece from becoming part of the Achaemenid Empire. The battle is further well known for the heroic rearguard actions of Leonidas and the 300 Spartans. The battle marked Spartan soldiers as among the best warriors of the ancient world, with indomitable spirits and refusal to surrender even in the face of great odds. It also allowed the rest of Greece to band together, particularly Athens, where a brilliant naval battle at Salamis was planned and executed.

History of the Battle of Thermopylae – Greek Boston