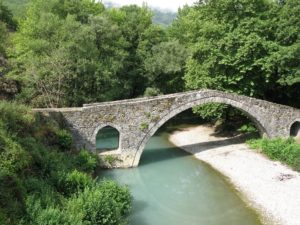 Parts of mainland Greece are known for their gorgeous mountain scenery. One of those places, Zagori, should definitely be visited if you’ll be spending time on the mainland. It has become a popular fall and winter destination that has provided many activities over the years, including hiking, horseback riding, and trekking. Here are some places to put on your list to visit while in Zagori and the surrounding area:

Vikos Gorge is located in Epirus, which is northwest of Greece. It has one of the second deepest gorges in the world after the Grand Canyon in the U.S. The walls are as high as 1,040 meters at several points, providing breathtaking views that you won’t want to miss. In addition, the Voidomatis River crosses this region and provides even more spectacular views of the surrounding scenery.

It’s become a popular tourist attraction, especially for sports lovers. Aside from rock climbing and mountain biking, the most popular activity is hiking. Hiking groups frequent this area to walk the excursions along the paved trails of Zagori.

During these excursions, you can check out the Byzantine monasteries, the famous stone bridges, and the quaint villages. While the hiking excursions are nice, it’s very easy to get lost and much less dangerous when hiking in small groups. You and your group should always hike with a tour guide in Vikos George.

This village is located on the highest points of Mount Tymfi, also known as Gamila. It’s one of the most beautiful villages in all of Zagori. This area can be easily accessed by walking over the Voidomatis River Bridge. Then it’s important to travel the road to Papigo Village since you’ll come across two districts: Megalo and Mikro. The road that leads to Papigo brings you the wonder of old Greece.

Once you walk along Papigo Village, you’ll wonder if it’s too late to travel back to your original accommodations. It’s likely that you can stay the night in one of the original houses in the village. If you don’t have a vehicle, you can take a bus to Papigo Village from Ioannina, which is available three times a week. Keep in mind that the bus leaves every morning and returns in the early afternoon.

Rizarios Centre for Exhibitions in Zagoria

This center is located in Monodendri Zagoria and was founded in 2001 as a tribute to Georgios and Manthos Rizaris, who was born and raised in Monodendri. They found success with their businesses in Russia and provided aid to the Greek War of Independence. They also used their wealth to start a non-profit organization.

The Rizarios Centre is found inside the Pantazis Mansion, which has been renovated by the Rizarios Foundation. The Centre is used to maintain the photogenic heritage of Greece. It also includes an outdoor theatre that has regular plays and musical performances.

The Voidomatis River flows through the villages in Epirus and Zagoria. It’s considered one of the most beautiful outdoor attractions in Greece. This river attracts tourists from all over the globe during the holidays. It’s famous for is clean water and traditional stone bridges. It has clean, crystal-clear water that’s safe enough to drink and splash in.

Popular water activities include canoeing, canyoning, rafting, river trekking, and more. Sever excursions and sports organizations have been founded along Voidomatis River. This river also crosses the Vikos-Aoos Natural Reserve, which is considered to be one of the most beautiful reserves in Greece. You’ll find plenty of villages and Byzantine monasteries, such as the Monastery of Panagia Spileotissa, which was dedicated to the Virgin Mary.

This village is located in Central Zagoria and sits at an altitude of 1,060 meters. You can access this village by traveling from Vikos Gorge and walking the cobbled paths that lead to the Misiou Bridge. This village consists of churches, manors, and schools, along with special attractions such as the monastery of Prophet Elias.

The most famous attraction in this village is Vikos Gorge, which was previously mentioned. This steep canyon makes Monodendri a popular spot to visit. Most of the architecture and construction from the 17th and 18th centuries are still preserved to this day. Also, the abandoned monastery of Agia Paraskevi, provides an amazing view of the entire village.

While visiting mainland Greece, you should consider heading to Zagori and the surrounding area. This area has a lot of natural beauty for you to enjoy and there are also some worthwhile attractions to visit.