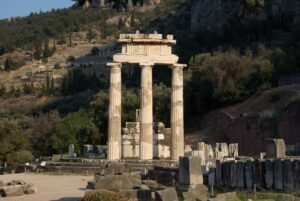 The charming Greek town of Delphi sits on the southwestern side of Mount Parnassus. In ancient times, Delphi was known for its Oracle, a priestess named Pythia who was said to communicate directly with Apollo, the god of light, harmony and of music. The ancient monuments located here make Delphi a UNESCO World Heritage Site for its importance to world culture.

Known principally for its ancient ruins, Delphi is also the site of a modern small Greek town. From here you’ll experience spectacular views of the Adriatic Sea and Pleistos Valley. The limestone peak of Mount Parnassus that was once believed to be the home of the Classical Muses dominates the landscape, dotted with olive trees.

Greece’s National Park of Parnassus is home to numerous plants and animals, from the Parnassian peony to badgers, boars, and wolves. The mountain’s two ski resorts, Fterolakka and Kellaria, make it the ski center of Greece.

Visit the Modern Town of Delphi

On the village’s east end, located near the post office and a café, is the Delphi Archaeological Museum. Here you can explore many ancient treasures, ranging from the famous marble Sphynx of Naxos to the world’s oldest-known musical notation. Renovated for its 100th anniversary in 2003, the 2-story museum is one of the most visited museums in Greece.

Spend Time at the Archaeological Sites

The ruins of the Temple of Apollo date from the 4th century B.C.. It was the sixth temple dedicated to Apollo on this sacred site, lasting until Christianity made worship of Apollo obsolete. This sanctuary was once home to the Oracle, Pythia, and is the site that people visit when they go to see the Oracle of Delphi.

Tholos is the remains of an ancient sanctuary dedicated to the goddess Athena Pronaia, or Athena of Forethought. Because some of the columns have been restored, the Tholos is an especially popular site for photography.

The historical monastery of Hosios Loukas and its connected cathedral are about a 45-minute drive away from Delphi, near the town of Distomo. Art lovers will appreciate its exquisite religious art from the Byzantine era. Dedicated to the venerated 10th century hermit Luke of Steiris, the sacred site bears examples of Byzantine mosaics and frescos.

Located about an hour and 15 minutes from Delphi by Highway E85, the site of the historical Battle of Thermopylae in 480 B.C. is a must-see for history buffs. See where the battle took place, visit the monument to King Leonidas I of Sparta and visit the Thermopylae Museum to learn about the battle in detail. Don’t worry, there’s a snack bar for refreshments if you need a break!

There are many reasons you should visit Delphi while in Greece. These include the picturesque mountain town, the Delphi Archaeological Museum, and ancient ruins such as the Temple of Apollo and the Tholos. Nearby attractions like the Byzantine monastery of Hosios Loukas and the battlefield of Thermopylae make this a tempting destination for art and history lovers. It is a convenient day trip from Athens, as well.