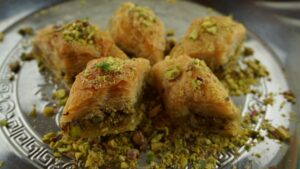 Greece is famous for its cuisine, and for the most part each dish features ingredients that are found in bounty in the country. The desserts are no exception.

For example, baklava takes advantage of the fresh nuts that are available in the country, as well as the delicious honey. However, there is more to the desserts of Greece than that! Here’s a look at the top pastries found in Greek cooking:

There is some debate as to where baklava originated. It is popular throughout the Middle East and the Balkans, but the Greek version is just better. It is a simple pastry made of layers of phyllo dough spread with nuts and drizzled with syrup or honey after it’s baked.

One of the characteristics that make Greek-style baklava stand out is that it’s made with 33 layers of phyllo dough, one for each year in the life of Jesus. But the casual baker can use less if desired.

These are Easter cookies eaten after Holy Saturday. They can look like little twists, hands, lifebelts, horseshoes, figure eights or Greek letters. The ancient Minoans used to make them in the shape of little snakes, as they worshipped snakes for their powers to heal.

The one thing that might stump an American cook when it comes to koulourakia is that they’re traditionally baked with baking ammonia, which gives the cookies their crunch. But double-acting baking soda is a good substitute.

A good koulourakia recipe has enough ingredients for a lot of cookies, and since the dough requires a bit of mixing and rolling, making the cookies is a great excuse to let the kids help. Eat them with coffee at breakfast or in the afternoon with tea. They can be eaten hot or cold.

As koulourakia are Easter cookies, kourabedies are Christmas cookies. However, both cookies can be eaten throughout the year! They are small, oval cookies dusted in powdered sugar and flavored with vanilla and a Greek liqueur called Metaxa. If Metaxa can’t be found, try a good quality brandy.

Other ingredients for kourabedies are lots and lots of powdered sugar, egg yolk, vanilla extract, slivered, roasted almonds and all-purpose unbleached flour. The cook may also want to spritz the cookies with orange blossom or rose water before serving.

This dessert came to Greece via Palestine and the Levant and is made of string pastry. The Middle Eastern version of this dessert is kanafeh. The pastries resemble mounds of fried rice noodles, but they’re moist and sweet.

Kataifi dough is shredded phyllo dough, and it’s mixed with roughly chopped walnuts, cinnamon, ground cloves and cow’s milk butter. The syrup should be cold and the kataifi piping hot when it’s poured on. This dessert is especially lovely paired with ice cream.

You won’t want to miss the chance to eat any of these pastries when you get the chance!