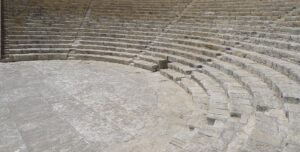 Sophocles, who was born around 496 B.C., is one of the most famous dramatists of Ancient Greece. It is believed that he lived to be around ninety years old, and during this time, he penned some famous tragedies. Many of these, such as Antigone and Oedipus Rex, are still being performed today. Besides being a playwright, he was also a politician. Here’s more information about him:

Sophocles is mostly known for the plays that he wrote, but he also had a political career. He entered a theater competition known as Dionysia, which he won. Cimon, a former winner and Athenian politician, was the judge the year that Sophocles won. Because of his win at this competition, he was propelled into the world of politics. He was chosen to lead a paean celebrating the Greek victory in Persians in 480 B.C., and after that he became the treasurer of the city of Athens. He also held an executive role in the Athenian city-state, and worked under Pericles, one of the most famous politicians of his day. It is believed that his work, Antigone, helped get him elected to a military position during the Athenian war against Samos.

Aeschylus is known as being one of the founders of Greek drama, and Sophocles improved upon what his predecessor already developed. Particularly, Aeschylus’ plays usually featured two characters, and Sophocles developed many of his plays to add a third character to the stage. Before this, Greek tragedies followed a format of having two speaking characters on stage and also a chorus, which acted as a sort of third person that propelled the narration forward.

Sophocles’ innovation was to add another character, which diminished the role of the chorus, and allowed for deeper character development. Since characters spent more time on stage together, they were allowed to interact more.

Sophocles’ plays Oedipus Rex (also known as Oedipus the King) Oedipus at Colonus, and Antigone are considered his three most important works. Although they all focus on the character of Oedipus, they are not considered a true trilogy because there are some inconsistencies between them. Oedipus is famously thought of as a King who, unbeknownst to him at the time, wound up marrying his own mother. His actions ended up cursing his family for several generations.

It is generally acknowledged that Sophocles is one of the most famous Greek playwrights of all time. Sophocles himself viewed his works as the continuation of an important cultural tradition and references Aeschylus’s work as something he built on and improved. Sophocles relaxed the Aeschylus’ formal language and introduced important developments that made his works even more gripping to his audiences.

Not only are his works referenced by the likes of Plato and other famous writers, but they are even still being performed today.