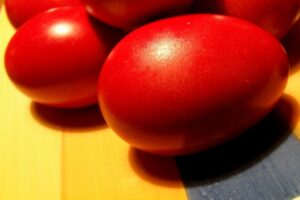 Easter, also referred to as Pascha, is the biggest holiday of the year in the Greek culture. After a long period of fasting that includes Great and Holy Lent and then Holy Week, Easter is a time when we not only celebrate Christ’s Resurrection, but also that we were able to make it through Lent and were able to survive without the things we fasted from.

In addition, there are a lot of traditions associated with Easter itself, and many of those involve food. The Easter feast is one of the biggest of the year. Here is a look at the most common foods that you will find on the Greek Easter table:

Although many cultures dye Easter eggs, there is an extra level of symbolism associated with the Greek Easter eggs. While other cultures choose various colors to dye their eggs, Greeks stick to one color – red. As it turns out, there is some symbolism associated with it. The egg itself represents Christ’s tomb. When it is cracked and opened, that represents Christ’s resurrection. The egg is dyed red to symbolize the blood Christ shed while on the cross.

There are many special occasion breads that are served throughout the year in Greece during various holidays, such as the Vasilopita that is served at New Year’s. There is also a special bread known as Tsoureki that can be found on the Greek Easter table. This sweet, cake-like bread is usually made with yeast, milk, butter, sugar, and a special spice known as “Mahleb”, which is a traditional ingredient that gives the bread its distinct flavor. A red Easter egg is usually baked into the bread to adorn it.

Lamb is a very traditional meat to serve at Easter. Not only does it taste delicious, but it also has some religious significance. In the Bible, Jesus is referred to as the Lamb of God. Besides the fact that it is a common meat in Greek cuisine, eating it is a reminder of the fact that Jesus died on the cross to save us from our sins. The Gospel of John states, “Behold, the Lamb of God, who takes away the sin of the world! (John 1:29).

The most common way to serve lamb is to roast it whole on an outdoor spit. However, you can prepare it in a variety of ways depending on the size of the crowd, your kitchen, and also your preferences. For example, you could also roast a leg of lamb, service Greek lamb stew, or even grill some lamb chops!

If you do decide to serve a whole lamb, you may also want to serve Kokoretsi, which is a dish that is prepared with the organ meats and entrails from the lamb. Nothing goes to waste in Greece! This dish is usually cooked in tandem with the whole lamb, either with another spit that is placed under the roasted lamb, or in a pan underneath the spit for the lamb. Kokoretsi tastes best when

This traditional soup offers another way to use meat from the lamb that is roasted at Easter. Traditionally, the head of the lamb, which is usually not included on the spit, is used. This soup includes greens, lamb meat, and it also includes an egg and lemon (avgolemono) broth. It is typically made in advance and eaten after the family returns from church early in the morning on Easter day.

There are many food traditions that are found on the Greek Easter table. These dishes are some of the most common!