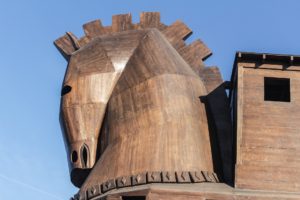 Greece has produced some of the most well-known pieces of literature in existence. Reading the Greek classics is a good way to increase knowledge, be entertained, and get a glimpse of history. The following are some of the ancient Greek classics you should add to your reading list.

The Iliad and the Odyssey by Homer

The Iliad is one of two major ancient Greek epic poems that were written by Homer. The Odyssey is a sequel to the Iliad. The Iliad and the Odyssey describe the Trojan War, which was a conflict between the Greeks and the city of Troy. The Trojan War was fought over Helen, the daughter of Zeus. A Trojan prince named Paris kidnapped Helen and the war began. In the Odyssey, it is said that the Trojan War ended when the Greeks pretended to give up, but had left a large wooden horse as a peace offering. Inside the horse were Greek soldiers who would emerge and burn the city.

The Histories by Herodotus

Herodotus was a writer and geographer who published The Histories, a magnum opus that recounted the Greco-Persian Wars. Herodotus was the first writer to study the past so thoroughly and explain the cause and effect of events. Herodotus spent his life focusing on The Histories. It would describe the origins and details of the Greco-Persian Wars (499 – 479 BC). After Herodotus’ death, The Histories would be divided into nine books by editors. The first five books explore the rise and fall of the Persian Empire. The final four books discuss the war itself.

Works and Days by Hesiod

Works and Days is a didactic poem consisting of 800 lines written by the ancient Greek poet Hesiod. The poem reads like a farmer’s almanac, which was intended as instructions in the agricultural arts (and how to conduct life) for his brother Perses. Hesiod was the heir to a farm that was left to him and his brother. After Perses squandered his part of the wealth he then wanted to claim Hesiod’s wealth. He would take his demands before the law, who he bribed, and they would find in his favor. Works and Days is a tribute to the benefits of a life that is devoted to work and prudence.

The Republic by Plato

In The Republic, Plato tells the story of several men on a trip who meet and argue about what they consider to be just and justice. This work is considered to be Plato’s masterpiece. It is an important work about politics and philosophy in history. The Republic consists of a number of books.

Oedipus Rex, or Oedipus the King, is an Athenian tragedy that was first performed around 429 BC. This was the second of Sophocles’ three Theban plays that have survived. All three deal with the story of Oedipus. The story is about a man who becomes the king of Thebes while at the same time fulfilling a prophecy that he would kill his father Laius and marry his mother Jocasta.

Greek writings played an important role in the development of English literature, so these classics are definitely worth a read.