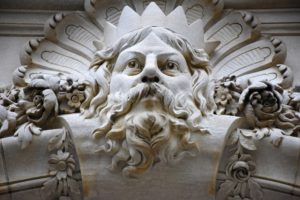 In ancient Greek religion, Zeus is the king of the sky and thunder as well as the King of the Gods. The name Zeus is thought to have come from the ancient Greek word for “bright.” Here’s what you should know about Zeus, King of Olympus. Here’s more information about Zeus:

Zeus was the youngest child of titans Cronus and Rhea. His siblings included Demeter, Hestia, Hera, Hades, and Poseidon. Cronus swallowed Zeus’ older siblings due to a prophecy he didn’t want to see come true, but Zeus was spared when Rhea sought help from Gaea and Uranus. The prophecy said that Cronus would be overthrown by his son just as he had overthrown his father Uranus.

His siblings would later be saved and Zeus would go on to marry his sister Hera. Together they had Ares, Hebe, and Hephaestus. Through his relationships with others, Zeus would also father Apollo, Athena, Hermes, Hercules, and Perseus to name just a few. Some of the relationships Zeus had outside of his wife included Calliope, who judged the dispute between Aphrodite and Persephone over Adonis, Europa, whom Europe was named after, and Nemesis, who was the goddess of revenge.

Zeus Becomes King of the Gods

It is thought that Zeus was raised by Amalthea, who according to different stories, was a nymph or a goat, to protect him from his father. When Zeus reached adulthood, he forced his father Cronus to disgorge his siblings in reverse order. Some accounts claim that he cut them out of his father’s stomach. For this reason, Zeus is sometimes considered to the oldest of the siblings. Zeus also released Cronus’ brothers, Cyclopes and Hecatonchires, from the dungeon in which they were being kept.

In appreciation Cyclopes gave him thunder and the thunderbolt, which had been hidden by Gaia. Zeus, along with his siblings and uncles, would overthrow Cronus and the other Titans. The defeated titans were cast into the underworld. Atlas, who fought against Zeus, was punished by having to hold up the sky. The Romans called Zeus Jupiter as he was thought to have the same powers as the Roman god Jupiter. He is also compared to other Indo-European deities, which include Thor, Indra, and Odin.

Zeus was a king revered by all. Zeus’ supreme power came with many roles and responsibilities. In addition to being the King of the Gods and the god of the sky and thunder, Zeus had many titles including Zeus Xenios or Hospites (patron of hospitality and guests) and Zeus Horkios (keeper of oaths). Zeus controlled the weather (especially rain and lightning), dispensed justice, and offered signs and omens.

He guaranteed order among both gods and humans. When Zeus became god of the sky, he assigned his brother Poseidon the sea and his brother Hades the underworld. Zeus is symbolized by the eagle, the oak tree, the royal scepter, the bull, and the thunderbolt.

Zeus was the king of gods and the king of man. He was highly respected and looked up to as a father even by those he did not sire.