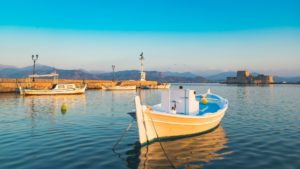 The Peloponnese region of Greece is rich in history, beauty, and natural wonder. This peninsula in Southern Greece is connected to the mainland by the Isthmus of Corinth land bridge. This iconic bridge separates the Gulf of Corinth from the Saronic Gulf.

Boasting miles of stunning coastline and a mountainous interior, there is no shortage of natural beauty in the Peloponnese. Here are three areas of Peloponnese to consider seeing when you visit this region:

This charming port city is known for the protective Palamidi Fortress. This fortress consists of eight self-contained bastions that are delicately linked by a wall. Completed in 1714 by the Venetians, the fortress was later seized by the Turks and today serves as the center of the town’s November 30th independence celebrations.

Other famous ancient fortresses that are located in Nafplion include the Bourtzi Fortress and the Akronafplia Fortress. A visit to any of these sites will provide a glimpse into what life was like in ancient Greece. You can connect with locals at the bustling Syntagma Square. The sun-drenched plaza is an ideal place to people watch and take in the beautiful culture of the Greek people. As the oldest part of the city, the Acronafplia should not be missed.

History enthusiasts will not want to miss the chance to visit and explore Olympia. As one of the most significant archaeological sites in Greece, this ancient city on the western side of Peloponnese is packed with a bevy of things to see and do. Olympia’s claim to fame is that it was the site of the first Olympic Games. While in Olympia, be sure to take the time to explore the Ancient Stadium.

The limestone and marble Temple of Zeus is conveniently located near the stadium, making it easy to combine visits to these two must-see destinations. To learn more about the first Olympic Games, you can visit the Museum of Ancient Olympic Games. As home to the statues of Hermes of Praxiteles and of Nike Paionios, the Archaeological Museum of Olympia is widely considered to be one of the best museums in the country.

Located on the northeastern side of Peloponnese, this popular archaeological destination is best known for its Ancient Theatre. Constructed during the 4th century B.C., this wonder was designed by Polykleitos the Younger. Massive restoration efforts in the 1900s have made this site a true replication of a theater during ancient times.

You can still catch a variety of theatrical performances during the summer at this classic theater. The calm beaches of Epidaurus are the perfect way to unplug from life and soak up the natural beauty of this region. The many seaside taverns provide a great respite from the sightseeing.

The Peloponnese is a region of Greece that is absolutely worth visiting. Not only is it rich in history and culture, but it is also physically beautiful. Spend some time visiting these sites, but also spend some time enjoying its beauty, especially at the beaches.