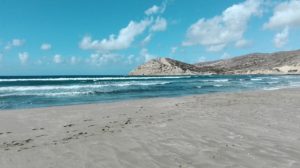 Rhodes is the biggest of Greece’s Dodecanese islands, which means there is plenty to do here. In ancient times, it was home to the Colossus of Rhodes, which was one of the Seven Wonders of the Ancient World. The island has a Mediterranean climate with hot summers; July and August are the hottest months with temperatures that can exceed 100° F.

One of the best things to do while here is visit some of the island’s beaches, but it can be hard to know where to spend your time since there are so many. Here’s a look at some of your options!

Ladiko Beach is a small beach that isn’t far from Faliraki village. It is also about 12 miles away from the city of Rhodes. This means that the beach is a convenient choice for those spending time in these locations. It sits on the coast of a bay and boasts a tiny cove. The sand is soft and white, and the beach offers a variety of facilities like sunbeds, freshwater showers, and umbrellas. There are also many taverns that serve delicious traditional food.

Kallithea Beach is also a convenient choice from the city of Rhodes. It boasts pine and palm trees, and the many renovated buildings show an Arabic influence. Kallithea Beach is most famous for its thermal springs and their healing properties. In 1928, Italians built a complex that has recently been renovated. There is also a café that doubles as a bar. Kallithea has a diving center, and it is a good place for snorkeling.

If you are staying in the city of Rhodes, you will find that Tsambika Beach is a little further away than some of the other beaches. However, it is still worth your while! It boasts warm, shallow, turquoise waters and golden sand that make it an ideal beach for families. Visitors can also rent jet skis and paddleboats. A store and restaurant provide snacks and drinks. The Tsambika Monastery, a Greek Orthodox church, stands on a rock overlooking the beach.

Afandou Beach is accessible from both the city of Rhodes and also Faliriki. Besides offering great beach access, it is also the home to one of the biggest water parks in Europe. The beach is a mixture of sand and pebbles, and it is popular with both swimmers and windsurfers. The shallow and calm water makes it an ideal beach for kids. While the beach is less developed than some others, it does have umbrellas, sunbeds, and watersports facilities. The nearby village boasts a number of hotels and restaurants.

Prassonissi Beach is known as a popular beach for outdoor sports, but it is also great for those looking to enjoy a great beach day. It is a long and sandy beach that is quite popular with windsurfers and kite-surfers. The beach is particularly popular during July and August when the Meltemi winds are blowing. These strong and dry winds come from the northern Aegean Sea, and they can cool down hot summer days. There are also restaurants and cafés near the beach.

The majority of the dozens of beaches on the island of Rhodes, including the five discussed in this article, are on the island’s east coast. The east coast of Rhodes is notably less windy than the west coast. Each beach offers different attractions. Tsambika’s shallow waters make it a good place to take children, while windsurfers will want to head to Prassonissi or Afandou. You won’t want to miss the chance to visit at least one of these beaches!