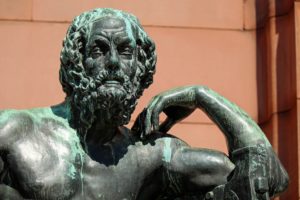 Homer was a Greek epic poet who is widely believed to have been the author of the Iliad and the Odyssey, two extremely important works from ancient Greece. The Iliad tells the tale of the Trojan War and the Odyssey tells the tale of the hero Odysseus’ ten-year journey home. While the works are very well known, not much as actually known about Homer, the individual who is said to have written those two works. Here’s a look at what we do know to be true about Homer:

When Was Homer Born?

There are no records that document anything about Homer’s life. Both the Iliad and the Odyssey are said to have been written in Ionia during the latter part of the 8th century B.C. Guesses as to when Homer was born range from 750 BC all the way back to 1250 BC. The Greek historian Herodotus (484-425 B.C.) believed that Homer predated him by about four centuries and was thus born around 850 B.C.

Homer, unfortunately, lived before the ancient Greeks had developed a system for tracking dates. The Olympic Games, which had debuted in 776 B.C, were the first evidence of such a system, and they divided time into four-year periods.

Who Actually Wrote His Poems?

There are three main theories about the creation of the Iliad and the Odyssey. The first holds that a single brilliant poet, whether Homer or somebody else, composed them. The second holds that they were the product of a group effort. The third holds that the two poems evolved over generations as oral traditions and that Homer simply compiled them, much as the Brothers Grimm collected and published folk tales during the 19th century.

What Else Do We Know About Homer?

Very few details about who Homer was, as well as about his life, actually exist. We don’t even know exactly where he was born, although no fewer than seven cities claim Homer as a native. The belief that Homer was blind stems from the depiction of a blind bard called Demodokos who appears in the Odyssey. He entertains a delighted audience with music and tales of battle, and some scholars believe that Homer had based the character on himself – thus making Demodokos one of the first self-inserts in literature.

While Homer himself is practically a ghost, the Iliad and the Odyssey have had a profound influence on Western culture. The philosopher Plato, in fact, said that Homer had “taught Greece” because of his works’ influence on Greek culture. The two poems have different styles with the the Iliad being more formal and epic, while the Odyssey is more novelistic and colloquial. Homer made extensive use of metaphors and similes, and he also liked to begin his tales in the middle of the action and fill in the gaps later on. Generations of writers have used his techniques in their stories.

Although we don’t know much about the poet himself, his works do endure through the ages. His stories are still being told today and they also have influenced other works of literature, such as James Joyce’s novel, Ulysses. The fact that Homer is shrouded in mystery seems to make his works even more enchanting.