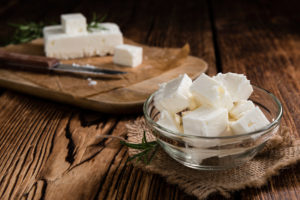 Greece is a country that is known for its cuisine, and in particular, for its cheese! The most popular cheese is by far feta. However, there are actually hundreds of cheeses that are made throughout Greece and each of them have their own, special quality. Here is a look at some of the more common cheeses the country has to offer, as well as how they are typically used:

Feta is one of the most popular cheeses in Greece, and it is exported all over the world. There are several variations of this cheese including mild, sharp, semi-hard, and semi-soft. In order to be considered “real feta” it needs to be made from either goat milk to sheep milk, not cow’s milk. It is used in various ways including in Greek salad, in casseroles, as a table cheese, in baked goods, and by itself as an appetizer.

Myzithra cheese comes in two different variations – fresh and dry. In some parts of Greece, it is usually served as hard cheese, while in others it is unsalted soft cheese. Both versions are white cheeses made from sheep or cow milk. The fresh version is ideal for breakfast when blended with honey, nuts, and fruits. The dry variety, on the other hand, is perfect for grating.

Native to Cyprus, this cheese can actually be found all over Greece and outside of Greece. It is especially known for its distinctive taste and its special properties. Because of its high melting point, it can be grilled or fried. It is white with a unique layered texture and a salty, creamy flavor. It comes in two variations soft and hard and is ideal for grating pasta and as a table cheese. It is also excellent with fruits and in salads.

Kefalotiri is made from goat milk, sheep milk or a blend of the two. The Greek-Cypriot variety is yellow with a unique flavor and dry texture. You can consume it on a cheeseboard alongside fruits like grapes and pears or add it to various cooked dishes or pasta alongside red wine. It is also perfect on salad, French fries, and pizza.

Kasseria is pasta filata cheese and is a semi-hard cheese made from sheep’s milk. It is pale yellow color and has a stringy, but soft texture. It requires untreated milk to get the right texture. If aged for a few months, it can be used as a table cheese, for pastries, Saganaki, or sandwiches.

This is another well-known Greek cheese across the world. It is made from a mixture of sheep’s milk, goat’s milk, and cow’s milk, depending on the region of Greece where it originates. Graviera is produced in various regions across the country with each region having its unique features. It can be grated, sliced, and served in salads or used in baked dishes.

Made with whey from goats or sheep and milk, Anthotiri cheese can either be dried or fresh. The dry variant is dry, salty and hard and is usually consumed as a topping in salads or on pasta. The fresh variation, on the other hand, is semi-hard or soft and has a creamy, sweet taste with no salt or rind. You can consume it as a savory dish with pas tries, wild herbs or oil.

Produced exclusively in Epirus and Thessaly, this type of cheese is made from yogurt, milk, and feta. Because it is perishable, it is rarely known outside Greece. However, it is soft and silky and can be spread on bread slices or used for dipping. It also has a lower calorie and fat content, which makes it a popular choice for those looking to cut calories.

Cheese has been part of the Greek culture for centuries. Although many of the cheeses mentioned here are not largely known outside of Greece, their popularity is growing rapidly and is becoming available at specialty cheese restaurants and stores across the world.