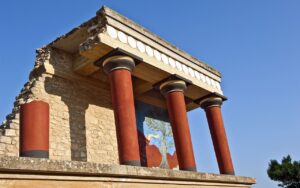 The country of Greece has a lot of wonders that people can explore while visiting. You can see the gorgeous scenery, lounge on the beaches, and enjoy the food. There are also plenty of historical sites from the centuries that you can visit. In fact, there is so much to see and do that it can be hard to choose!

Along those same lines, Greece also has some interesting places that can trace their roots to some of the stories of Greek mythology.

It’s pretty well known that Zeus and Hera didn’t have the best relationship. He constantly cheated on her with gods, mortals, and creatures alike, and because of this, Hera was often jealous. She would act out against the Zeus’s mistresses, and even against the offspring created from these unions, as is the case with Hercules.

Knossos Palace has a legendary place in both Greek History and Greek mythology. It is uncertain why the great archaeological site of Knossos Palace was abandoned, but an estimated 100,000 people are believed to have lived there at its peak. It is thought to have been the political and ceremonial center of Minoan culture until this mysterious disappearance at the end of the Late Bronze Age.

Besides that, it is also speculated that the palace was the origin of the legend of the Minotaur, which is a valuable part of early Greek mythology. Today, remnants of the palace still stand, and visitors can also peruse the nearby Minotaur’s Labyrinth while here.

Besides being present in the Greek mythological stories, the Archeron River is an actual place in Greece. It is said to have been one of the five rivers of the underworld. The Ancient Greeks believed that these five rivers flowed into the Underworld where they would meet the god, Hades, in the afterlife. Today, he river is a popular destination for travelers looking to soak up a bit of the past and to also enjoy the gorgeous scenery.

The Temple of Poseidon, which is located at Cape Sounion not far from Athens, is one of the major monuments of the Golden Age of Athens. Though the original temple was destroyed by the Persians in the year 480 BC, we can hold our breath as we stand in the shadow of what remains, truly a wonder of this ancient culture. This temple pays tribute to Poseidon, the god of the sea, and also offers gorgeous views of the sea. Be sure to visit at sunset so that you can take some amazing photos!

Today, Mount Olympus is one of the most popular hikes in all of Greece. Journey up to the peaks that inspired awe and fear in this people that vanished so long ago; the gods might not live there anymore, but our wonder will keep their power alive.

Greece is a rich and vibrant country that has a lot to offer its visitors. If you love Greek mythology, you will definitely want to visit these sites!