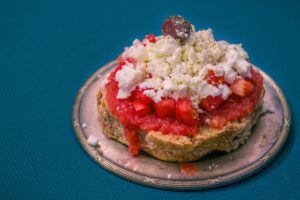 Back in 1947, a man by the name of Ancel Keys began gathering data for a study that would ultimately begin ten years later, and would crown the Mediterranean Diet as being one of the healthiest in the world. His main goal at the time was to observe the traditional diet of seven different countries in order to determine how healthy they were.

The island of Crete was chosen as Greece’s representative, and the original thinking was that the diet was fairly unhealthy because of the high consumption of fat from the island’s traditional olive oil. The study findings, actually, showed quite the opposite. The inhabitants of the island were so healthy, the diet was, and still is, studied for its numerous health benefits, and olive oil is one of its main components.

The diet present on the island today is not that much different than the one that Ancel Keys studied. Those who visit the island are delighted by the cuisine, and as an added bonus, it is ultra-healthy. Here’s a look at the top foods you should try while visiting this island:

Referred to as liquid gold, olive oil is produced in abundance on the island. It is so prevalent, in fact, that it has been a valuable addition to the diet for centuries. It is used as a finishing oil for many dishes, especially vegetable dishes. It is also used abundantly in most of the island’s dishes, and is even used in its desserts. While here, you should try as many varieties of olive oil as you can, and even take some home with you as a souvenir so you can enjoy it long after your trip is over.

This is one of the most popular and most traditional dishes in all of Crete. Made using traditional, whole grain rusks, chopped, fresh tomato, Greek herbs, and plenty of olive oil, this dish is regularly found on a traditional Cretan dinner table. It is also often made with traditional Cretan cheese, when it’s available. This makes for an excellent addition to any meal, and it is also a delicious snack!

Fresh seafood isn’t exclusive to the Greek island of Crete. In fact, it can be found in abundance in all of the coastal areas and islands. However, there is something really special about in on the island of Crete, and that’s maybe because the fresh seafood is such a delicious fit with the rest of the island’s cuisine. Plates of lightly fried sardines, traditional octopus, and even special Greek lobster can be found in abundance here. The magic is that you only eat what was freshly caught that day.

Sure, most of us know about feta cheese, which can be found throughout Greece. However, on Crete, there are some cheese varieties that are unique to this island. They are all part of the charm of the island, and you should make it a point to try as many of the different types of cheeses as you can during your visit. You will also want to try the traditional Cretan cheese pies, called kaltsounes, during your visit.

This isn’t a food, but you will definitely want to drink some raki while you’re on the island. This beverage is found in abundance on the island, and it is often given to you on the house while dining out. This beverage is strong, so you’ll want to sip it slowly. It goes especially well with grilled meat and other traditional foods.

One of the things you will notice while on Crete is that the food here is very fresh. Cretans tend to eat according to the seasons, and you won’t find out of season vegetables and fruits sold in markets. For example, if you want to eat fresh strawberries, you will need to wait until they’ve been perfectly ripened and picked. This is something to keep in mind while sampling foods on the island!

Great Experiences to Have with Food on Crete