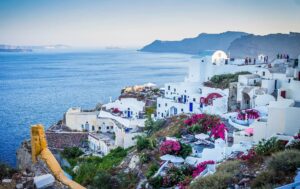 Literature is alive and well in Greece, and there is a strong literary tradition there that was started in Ancient Greece. Although many of us may be most familiar with the works of the Ancient Greek poets and philosophers that we’ve learned about as we’ve grown, modern Greek authors should not be overlooked at all. Here is a look at some modern Greek novels you can add to your ‘to be read’ list:

Published in 2012 and shortlisted for the Greek State Prize for Fiction, The Scapegoat by Sophia Nikolaidou is an ambitious novel that spans the Greece of the post-World War II era and the Greece of today. Taking as its starting point a fictionalized account of the murder of American journalist George Polk, the novel is ultimately one about political injustice and the corrosive effect that silence in the face of that injustice can have on individuals, families, and a nation. This is the author’s fourth novel; since the late 1990s, she has stood out as a talented new novelist and short story writer.

The Clover House (2013) is the debut novel of Henriette Lazaridis Power, a Greek-American living in Massachusetts. The main character, a young woman living in Boston, flies to the city of Patras, Greece, to receive the inheritance left to her by a deceased uncle; what ensues is a complex mystery involving family secrets and even some Greek history: specifically, the German and Italian occupation of Greece during World War II. At its core is a study of a fraught mother-daughter relationship and a quest for identity.

Why I Killed My Best Friend

Ever since she published her first book, a short story collection published in 1994, Amanda Michalopoulou has been a name to be reckoned with in contemporary Greek literature. She has earned several awards, including the Diavazo Award, the Revmata Prize, and the Academy of Athens Prize. This provocatively titled novel, which she wrote in 2003 (English translation published in 2014), tells of a destructive friendship between two women.

In a non-linear fashion, and covering a time period from the 1970s to the present, the author covers not only the coming-of-age of, and the personal conflicts between, the two main characters but also much of modern Greek history and politics. All in all, it’s a challenging but rewarding read.

Alexandros Papadiamantis (d. 1911) was a highly regarded poet, novelist, and short story writer; some call him the father of modern Greek literature and compare his realism and his empathetic portrayal of human suffering to those of Dostoevsky.

His masterpiece is The Murderess, a chilling novella (just around 130 pages) about a woman who murders poor unmarried girls as a supposed act of mercy, sparing them and their families a harsh and bleak existence. The translation, which retains all the lyricism of the original Greek, belongs to the New York Review Books Classics imprint.

The next time you feel like reading a novel, consider one of these choices from Greece!