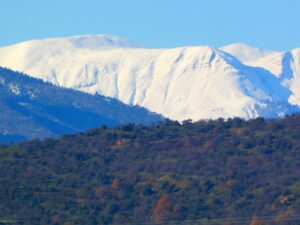 Greek cuisine is known as being some of the healthiest food in the world, and one of the things that makes it that way is its idea of seasonality. Certain ingredients are only available at certain times of the year, which means that when you eat, the food is fresh.

Contrary to the belief that some have that Greece is warm year-round, many parts of Greece do experience colder temperatures in the winter.  Just like in cold weather anywhere else in the world, people experiencing the cold in Greece tend to look towards warm and hearty comfort foods during these times.  Take a look at some of the comfort foods unique to Greece based on the foods available in the region during the winter!

Soupa Spetsofai is probably the most popular winter delicacy in Greece. This dish consists of beans, meat, and various vegetables typical for the mountainous areas in central and northern Greece, such as potatoes, carrots, celery, onions, and tomatoes. These ingredients are slowly cooked in a large iron pot for several hours.

Spetsofai is usually eaten with boiled or roasted potatoes, feta cheese, and a glass of red wine. As its name suggests, this stew is best enjoyed on cold winter days!

Cabbage salad is one of the most common dishes enjoyed during the winter season in Greece, primarily since cabbages are so plentiful at this time of year. It is combined with onion, garlic, and olive oil dressing. It is usually eaten as a main course alongside meat or fish dishes and bread. Essentially, the meal can also be enjoyed as a light dinner accompanied by cheese and wine. The ingredients for this salad vary from region to region, resulting in various traditional recipes throughout the country.

This salad is especially prevalent in Greek villages during the winter.  It’s become an integral part of village life due to its nutritional value, and the fact that it warms the body while simultaneously satisfying hunger during cold days. If you visit a Greek village in the winter season, you will likely run into a local eating a cabbage salad at some point during your journey, and potentially be offered the opportunity to try one yourself!

Fasolada is a typical winter soup in Greece. This hearty dish is made of white beans, and it is seasoned with onion, garlic, bay leaf, and olive oil. In most households around Greece, this soup is prepared daily during the cold months of the year as it has been proven to have therapeutic benefits when consumed regularly.

Fasolada is enjoyed alone or with feta cheese and bread. Importantly, this cuisine can also be combined with meat or fish dishes to make a more filling meal. Its wide range of vitamins and high protein content makes it a nutritious food in the winter months.

This soup is mostly served hot, but in some occasions, it is eaten cold when garlic or olive oil may not be favored.

Giouvarlakia is a traditional Greek soup made of meatballs combined with rice, tomato sauce, and spices. It is mainly eaten in winter in most regions of Greece, especially the northern ones. As suggested by its name, this dish has many similarities with Italian “meatballs in tomato sauce.”

The best time to eat Giouvarlakia is when you are feeling sick. Its ingredients have been proven to improve your health and help you fight the flu. Thus, this cuisine does not only taste good but it is healthy too!

As with many traditional Greek dishes, there are different variations throughout Greece depending on each region’s local ingredients.

Greek soups, bean dishes, and salads taste best during wintertime in Greece! They all have a great nutritional value thanks to their vitamin-rich ingredients that will keep you warm and healthy throughout the cold months of the year.