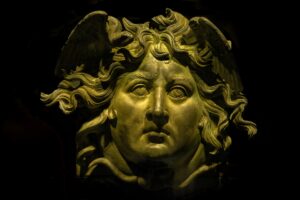 Ancient Greek Mythology is filled with plenty of memorable monsters and beasts, and their stories have endured the centuries. When people are asked to recall these monsters, some stand out more than others. Medusa is one of the most iconic monsters in Greek mythology, rightfully earning her place as the enemy of the hero Perseus. In this article, we’ll examine the myth of Medusa in detail and look into how she has become a part of the modern world. Here’s more information about her:

Medusa is one of the three Gorgons, the three daughters of the primordial ocean deities named Phocus and Ceto. While physical descriptions of Medusa vary widely, the most ancient writers describe her as a beautiful woman with wings and snakes in her hair. Medusa had a strong hatred for men and would turn them to stone with her very gaze.

However, some stories show a different side of Medusa, where unfortunate circumstances turned her bitter against men. Some stories indicate that Medusa was once a normal, yet beautiful, woman who had devoted her life serving the goddess Athena in one of her temples. Her beauty enchanted Poseidon, who then ravaged her. When Athena found out, she cursed Medusa, which turned her into a monster.

Story of Medusa and Perseus

In the story of Perseus, the young hero is sent to get Medusa’s head by King Polydecte of Seriphos. In the story, Polydecte sends Perseus on this quest believing that he will die. This would allow Polydecte to marry Perseus’s mother Danae without the hero’s objection. Knowing Polydecte’s plan, the Olympic gods gave Perseus a special mirror shield to help him in his fight against Medusa.

Returning to Seriphos, Perseus presented Medusa’s head to Polydecte, who immediately turned to stone upon gazing into the dead Gorgon’s eyes. Perseus continued to use Medusa’s head as a weapon throughout many of his adventures before presenting it to the goddess Athena.

Modern scholars have varying interpretations of the myth of Medusa. The famed comparative mythology professor Joseph Campbell saw Medusa and her confrontation with Perseus as a reconstruction of an actual event. Campbell argues that Perseus’ beheading of Medusa is a retelling of the sack of a temple in the 13th Century BC, where invaders killed priestesses who wore Gorgon masks.

The psychologist Sigmund Freud developed a psychoanalytical take on Medusa’s story in his posthumous work Medusa’s Head. In the brief essay, Freud argued that Medusa’s story reflects an innate fear of castration. Freud likens Medusa turning men into stone to a father punishing his son for having illicit feelings for his mother.

Medusa as a Feminist Icon

In the middle of the 20th Century, feminist writers began utilizing Medusa as an icon for women everywhere. Many such writers see Medusa as a symbol for feminist rage, having the ability to give women power over their oppressors. Others see Medusa as the protector of women and the quintessential strong woman. In these types of interpretations, Medusa is reimagined as a blameless victim of Perseus, who seeks to destroy her because of her power.

The story of Medusa is one of the most iconic tales in Greek mythology. The imagery associated with the myth remains potent to this day and Medusa occupies a powerful place in both the world’s imagination and our modern lexicon.