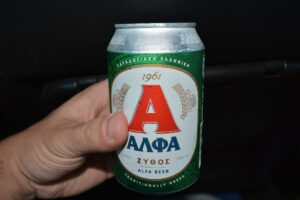 Beer isn’t traditionally associated with Greece. Although there is some early evidence that beer was being brewed here in ancient times, it really didn’t achieve popularity until recently. The first King of Greece, Otto, was originally from Bavaria. It was his reign that began the process of beer becoming popular in Greece. There are now several breweries located throughout the country.

While visiting Greece, you might want to consider trying some Greek-made beer during your trip! Many breweries offer tasting rooms in addition to tours of the facility. Here are some of the top destinations to sample beer while here:

If you visit nowhere else in Greece, you can’t go wrong with this city! There are a lot of well-known breweries in the city of Athens and in the surrounding area. Breweries to visit include Noctua Brewery, Noble Men Beer, Eliki Brewery, and the Athenian Brewery. Not only that, but restaurants, tavernas, and bars throughout the city serve up a plentiful amount of beer brewed all over the country. There is a new beer to sample no matter where you go in Athens.

As the second-largest city in Greece, there is certainly no shortage of places to drink beer in Thessaloniki. Besides being able to sample beer in the city’s many restaurants and bars, there are also some well-known breweries here. You can also go straight to the source to sample beer! Be sure to visit Alea Brewing Company, Thessaloniki Microbrewery Ltd, and the Standard Microbrewery of Thessaloniki.

Santorini is the home to some up and coming breweries that are gaining importance on the Greek beer scene. This is the home of the Santorini Brewing Company, which creates the famous Donkey beer that is available all over Greece. While in Santorini, you will want to consider visiting this brewery, taking a tour, and trying some of their beers. You should also consider stopping in on the Volkan Brewery, which is also located on this island.

The island of Crete is a must-see destination for those who are looking to have a complete Grecian experience. There are plenty of historical sites to see, beaches to lounge on, and a cuisine that captivates people from all over the world. Although beer is fairly new to this island, it has its share of fans. While on this island, consider stopping in at the Rethymnian Brewery, Cretan Brewery, Helmison’s Brewery, Kasta Microbrews, and the Lafkas Brewery. Not only that, but many restaurants, tavernas, and bars regularly serve these beers, so you don’t need to do a brewery tour to enjoy them.

Although Greece isn’t known for its beer, there is certainly no shortage of beer to enjoy while here. You can’t go wrong with any of these choices, but the destinations we’ve listed here are some of the best options in the country for trying beer.