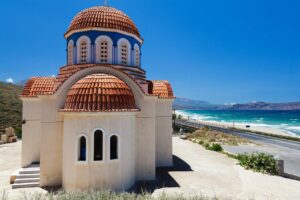 In the Greek Orthodox Church, infants are typically baptized when they are young. There is no age limit for baptism, but adult baptisms are usually only seen during conversions to orthodoxy.  As far as family and tradition goes, Greek families prefer to baptize children as infants.  The sacrament is a cultural rite of passage and usually celebrated with a party or reception that takes place following the church service.  The baptismal ceremony itself, however, is the most important part of this important tradition.  Here’s more information:

Getting Prepared Before the Ceremony

Before the ceremony begins, parents must ensure that they have the following items. Typically, both the parents and godparent(s)-to-be make sure that the priest has the items he needs for the ceremony itself. Typical items used during the baptism ceremony include:

Once the items are gathered and the priest is ready, it is time for the ceremony to begin. It starts when the priest instructions the parents of the baby to hand over the baby to the godparent(s) at the church door. The godparent will receive the child and rebuke the devil.

The priest will then lead them into the church where a child’s grandmother (or other female relative) will be waiting with a white wrap for the baby. While the baby is being undressed by their relative and prepared for the ceremony, the priest will begin the ceremony by blessing the water in the baptismal font and adding the olive oil brought by the godparent.  Once the child is returned, the priest will help the godparent rub the child with oil before dipping them three times calling his name in the name of the Father, the Son, and the Holy Spirit.

After that, the priest will hand over the child to the godparent and he will cut four locks of the baby’s hair to symbolize the cross of Christ and put it in water. The child will be dressed in the new white outfit then the priest will put a golden cross necklace on the baby. The new godparent will be handed the child and will light the large, and then the two small candles.  The smaller candles are typically given to smaller children in the family to hold, and the godparent and child proceed to walk around the baptismal font three times to symbolize the joy of a new soul being consecrated.  Once the ceremony is completed, the parents of the baby kiss the godparent’s hand and receive their child.

Any adult wishing to join the Greek Orthodox church, who has not already been baptized in another church, is able to be baptized as well.  The ceremony is similar, but swimsuits are worn and if an adult baptismal font is not available, the adult being baptized will likely stand over the regular baptismal font while the water is poured over their head and hands.

After baptism, the child will be given their first sacrament immediately. In Protestant and Catholic churches, this sacrament is known as confirmation and is administered years after baptism. Chrismation can also be performed on adults who have completed their catechism classes and have been baptized.

In the old testament of Bible, a woman was required to take forty days before going back to the temple. After that, she would take her son to temple to be dedicated to God. The Greek Orthodox church follows this practice to date. The difference between the two is that both boys and girls are churched – introduced to the church after baptism.

The christening is a vital ritual for Greek Orthodox Christians because it represents a new life being born in Christ and named as somebody who will be accepted into Christ’s kingdom.  It sets the foundation for their spiritual development and religious belief system.