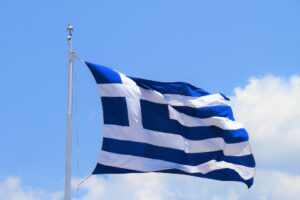 Greek is a language that is worth learning, but if you didn’t grow up speaking it, learning it can feel like an insurmountable challenge. It has a different alphabet than English, and while some letters are pronounced similarly to their English counterparts, others require sounds we may not be used to making. Learning how to properly pronounce and combine the letters to make words, and then learning the grammatic rules of the language on top of that can seem daunting, but it doesn’t have to be. We’ve compiled some tips that can help you get started on your journey to learn Greek!

This is where it all begins. Don’t let the fact that some of the letters look different intimidate you, the Greek alphabet is actually one of the easiest to learn. The letters are easy to distinguish from each other, and you can learn them quickly with a little memorization. This is the foundation of the language, though, so it is worth it to take a step back and complete your thought because I don’t know where you were going with this one, sorry!

Use Flashcards to Help You Memorize

Flashcards are an excellent way to understand how different words are spelled in Greek, how they’re pronounced, and what they mean. You can get creative with this method depending on what skill you want to work on, but generally the easiest way is to improve vocabulary and grammar by writing the Greek word on one side of the card and its English translation on the reverse side. Alternatively, in addition to the translation, you could have different forms of the word, pronunciation, or ways to use it in a sentence, depending on how far along you are in your lessons.

One of the best ways to learn and retain the Greek language is to play a matching game using English. For example, you can write down two words on separate pieces of paper, one in Greek and one in English. If there’s a match between the two of them, put them together. Keep doing it until all the words are matched up. If you feel especially creative, you can turn this into a bigger game that multiple people can play, similar to childrens memory card games, in which multiple pairs of words would be mixed up and spread out in a grid form. Players would take turns turning over two cards at a time to try and find a Greek world and the English translation that matches it. Whoever has the most cards at the end of the game is the winner.

While it’s one thing to learn how to speak a language, it’s a whole other thing to understand the culture that comes with it. It can be difficult to know exactly where to start, but there are many resources available. For example, you can watch Greek movies and TV shows with English subtitles on them. Being able to hear the language while simultaneously being able to watch the action on screen and read what’s going on will help you both understand and absorb the language and the culture of the Greeks.

The best way to retain everything you learn about the Greek language is to make sure to practice speaking Greek as much as possible. While it may not be easy the first few times that you try it, it will start coming more naturally the longer you speak it. If you don’t know anyone who can speak it, there are multiple online resources you can search for in order to find someone to converse with.

These are just a few tips for learning the Greek language. There are many different techniques you can try that will make the process easier and more enjoyable. After a while, it will become second nature to you and you’ll be speaking the language without even thinking about it!