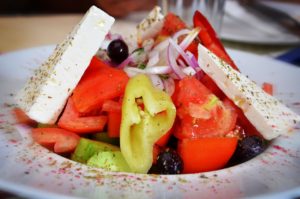 The food in Greece is as fresh as it gets. Fresh fruits and vegetables are picked as soon as they’re ready and eaten. Seafood is freshly caught and eaten the same day. When meat is eaten, it’s usually because the animal was fresh. As a result of this idea, the food seems to taste extra delicious! Here’s what you should know about eating for the seasons in Greece.

What is “Eating in Season?”

Around the world, people are used to going to the grocery store and buying whatever they want no matter the season. The freezing of fruits and vegetables is a big contributor to this. It’s easy to forget that some places, such as Greece, people eat differently. The people of Greece eat for the seasons, which means they only have access to what is grown around the country. During the winter, crops will be different from the crops of summer. If something isn’t in season, it simply isn’t eaten. In Greece, it’s not uncommon to shop for fresh fruits, vegetables, meat, and fish multiple times a week. This might sound restrictive, but it’s actually exciting!

How Do You Know What’s in Season?

When shopping for food in Greece, there is a new selection each season. It’s easy to see the varied flavors of each season of eating in Greece.

During the spring, you will find that the fruits and vegetables that became ripe during the winter will still be good for a while. These include: potatoes, parsnips, carrots, and Brussels sprouts. In April and May, zucchini, green onions, rutabaga, green beans, fava beans, and peppers will be available. May is berry season and other fruits including oranges and apricots are in season during spring.

The summer season will find eggplant, garlic, parsley, spinach, tomatoes, potatoes, and peas in season. A lovely summer meal to try is Greek stuffed vegetables, also known as yemista. So many different vegetables can be stuffed: peppers, tomatoes, and zucchini to name a few.

Autumn in Greece brings apples, figs, grapes, root onions, romaine lettuce, potatoes, and peppers. Greek peas and potato stew with tomatoes is a wonderful choice of meals during the autumn.

Learning How to Cook for the Season

Cooking for each season doesn’t have to be difficult. The fruits and vegetables may change from month to month, but there are a number of dishes that work well with the variety. Pita recipes are very adaptable to the vegetables that are in season. One season you may enjoy spinach pitas and another you may indulge in cheese pitas. Rice dishes are another that vegetables, herbs, and meats can be swapped depending on the season. Soup ingredients can be changed according to season as well.

Cooking according to the season is a great way to change up favorite dishes with a variety of ingredients. While in Greece, you will notice that food is freshly prepared and the seasons are definitely a factor.