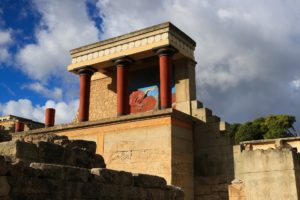 The Palace of Knossos is the backdrop for one of the most famous stories in Greek mythology. Located on the island of Crete, parts of the palace are still standing and can still be visited today.

With its sprawling grounds, beautiful frescos of dolphins cavorting with bare-breasted maidens, and stunning architecture, it’s easy to see how the palace might have elicited such incredible tales from its ancient occupants. While visiting the island of Crete, you won’t want to miss the chance to see it. Here’s more information:

Knossos is the largest of the four Minoan palaces built on Crete. It was constructed around 2000 BCE, and the main building alone sprawls across three acres. It was a place of ceremonial importance in the Minoan culture and a major trade hub of the eastern Mediterranean until its destruction in 1370 BCE.

Although some historians and archaeologists have speculated that it was destroyed in the cataclysmic volcanic eruption of Santorini, the historical consensus has remained that human violence was to blame. The site was first discovered by the Greek merchant, Minos Kalokarinos in 1878. However, most of the credit for developing Knossos went to Arthur Evans, a French archeologist. The main excavations began in 1900 under his supervision.

The legend of Knossos tells the story of King Minos who lived in the palace with his daughter, Ariadne, and her suitor, Prince Theseus. From across the sea, Prince Theseus, son of King Aegeus, came for a visit. The young man met and fell in love with the beautiful Ariadne. Displeased by this, King Minos told Theseus that he must fight and defeat the monstrous Minotaur, a creature with the head of a bull on the body of a man, if he wanted to marry his daughter.

However, it was a trap, since the Minotaur was kept in a maze known as the labyrinth. Even if he managed to defeat the creature, poor Theseus would never find his way out! Knowing her father’s intentions, Ariadne gave her lover a ball of yarn to help him navigate the labyrinth. Theseus managed to kill the Minotaur and escaped the maze with the help of the thread. He and Ariadne then fled Crete together, leaving the angry King Minos behind.

Information About Visiting the Palace

Knossos is about 20 to 25 minutes outside the city of Heraklion, reachable by bus, car, or taxi. The best times to go are in the spring and fall as temperatures are milder and there are fewer tourists. Whenever you go, plan to arrive early in the day and allow two to three hours to explore the palace and its grounds. If you do decide to visit, you will want to check the hours of operation and the prices. You may also want to consider taking a guided tour while there.

While on the island of Crete, you won’t want to miss the chance to visit Knossos Palace. Whether you’re an archaeology buff, you love ancient history, or you’re interested in Greek mythology, you’ll be glad you came.